I woke up this morning to grey, wet weather again. Despite being able to tell that SLC was nestled into the mountain range -  exactly what I had been expected, and then disappointed by in Denver - I couldn't get a good sense of the views, obscured by fog and clouds and blah. This is part of the reason I was buying time in Reno. Therefore, I wanted to stay, aware that better weather was on the way and Kristen told me to go to Park City. Well, Kristen and half of my friends on Facebook. I went on Yelp and looked for more thirft shops - my winter wardrobe lacking. I was never expecting to experience a winter this year - let alone and early one. I really failed at the goal of not seeing anymore snow (...she types as its mid-sixty degree weather back 'home.')

I got two skirts, a sweater and a bag for $30 in the Sugar House area of town. And then by evening the skies were on their way to clearing and I headed to the park down the street (in search of a toilet) and managed to grab a couple of nice photos. And a particularly beautiful shot of the sunset from the east (above...another below). It is one of my favorites of the trip - and on my phone no less. (Unfortunately the toilets were all locked. Damnit, off season! Maybe I should have waited to leave in spring.) 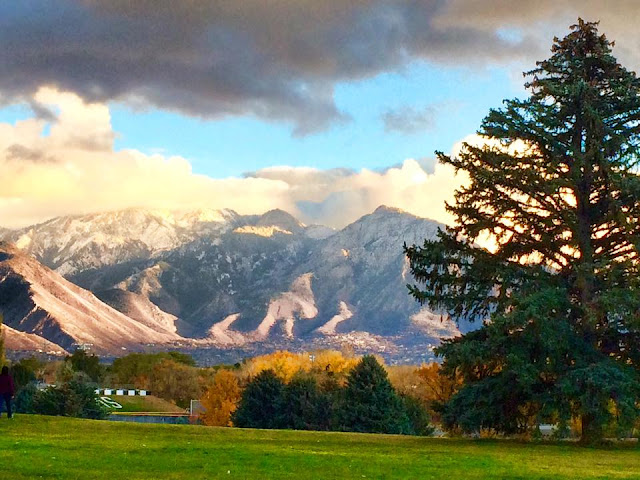 After, I headed to City Center Plaza, not because I could afford anything, but because the Internet said it was something to see. While re-upping tank tops that got ripped apart by a washer in Texas (because that's a thing?) for $1.90 at Forever21, I walked up to the girl at the counter and she immediately said, "You're like picture perfect, by the way."

"Thank you!" both flattered and relieved that's why she was giving me such weird looks as I waited in the queue.

I headed back to my hotel and I stopped by the RedBox to return the movie Id' rented the night before. I jumped out of my car as a men stepped up to rent and asked if I could quickly return a movie. He acquiesced.

I woke up this morning - sleeping through breakfast for the second day in a row (good thing I'd made myself that bathroom chicken). Bad form, vagabond, missing free food. Although I did drink copious amounts of their lobby coffee (which I have found staves off hunger for quite some time), so good for vagabond. After checking out, I headed to my car and loaded my life back into it. On it, I found a post it note - it was from the guy I'd jumped in front of at the RedBox last night:

Oh...oh it was most definitely time to go. But first, I had to see Park City. It was fun and beautiful and cute - as those tourist mining towns are wont to be.  While in a boot store - in which I couldn't even sort of afford anything - the woman working asked, almost immediately: 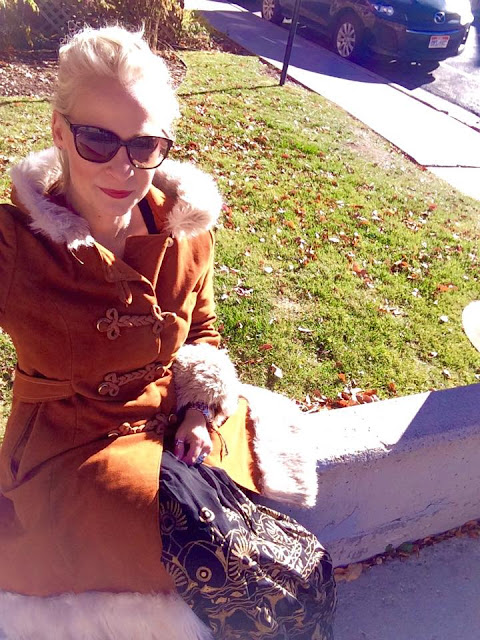 A little more audibly laughing, "No."

"Oh, well. You never know with all of the movies they shoot around here. You're just so beautiful.  And your make-up is picture perfect."

That was a confidence booster for sure. Two in a row, and from women who really seemed to mean it. This coat is magic, you guys! After, I took a moment to sit on the sidewalk to take a quick photo to document this magical moment before heading to the Olympic Park and then back to Salt Lake. I plan to drive somewhere new tomorrow - magic coat in tow - although I'm not sure where. But for now I have a Tinder date and I hope he utters those three magical words: "Are you hungry?"