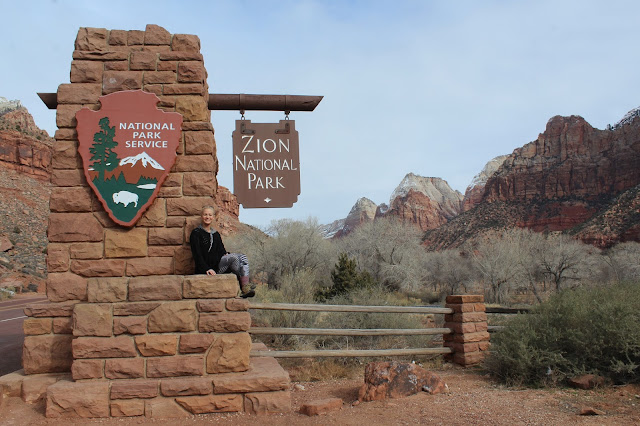 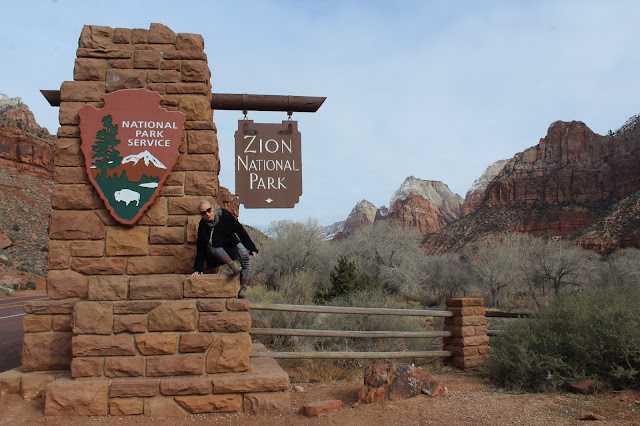 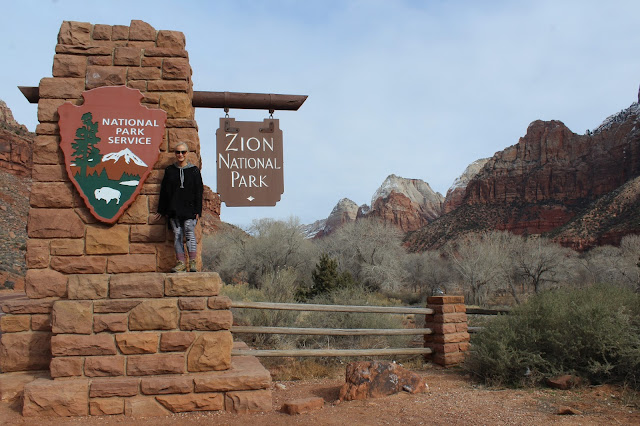 I arrived at the entrance of Zion, running into a group of what I'm guessing were young college kids. My method of taking images of myself at the gates (or whereever) is to set my camera up on a tripod, hit the timer and then run like hell to climb to my spot before 10 seconds is up and the seven images I have set it to take finish. The group watched me do this at least four times - check the focus in the camera, click the start, run up to the sign; smile and pose, then hop back down, check the pictures and repeat. After the fourth time they asked if I needed help, but I declined having noticed a short line of two other cars waiting to get their images at the gate.

Afterwards I went to the visitors center to pee and grab a map. I learned that on the off season (yet another perk) visitors could go down a certain stretch of road by car that ordinarily could only be reach by park shuttles. I got my commemorative pin - which are getting way to heavy for my one purse strap now - and then went to check out the campsite. It wasn't full. However, it was cold and I was fully committed to the cold, plus I am supposed to be in Banning tomorrow to meet my friend and that's like a 6 or so hour drive, so I would wait to see what happened and pitch later. I then explored the park; taking pics, driving around the switchbacks and through a tunnel carved through the red rock, down a small path and behind a shrub to pee, and then making lunch out of my trunk as other visitors passed by: 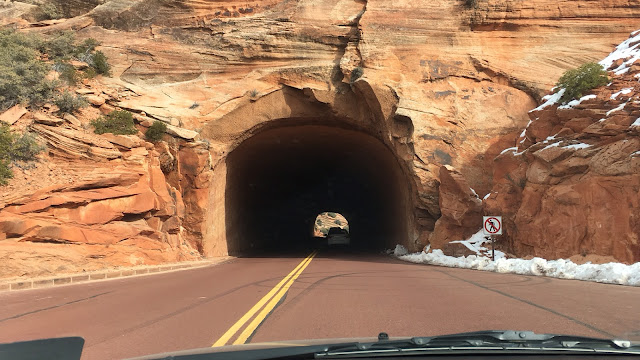 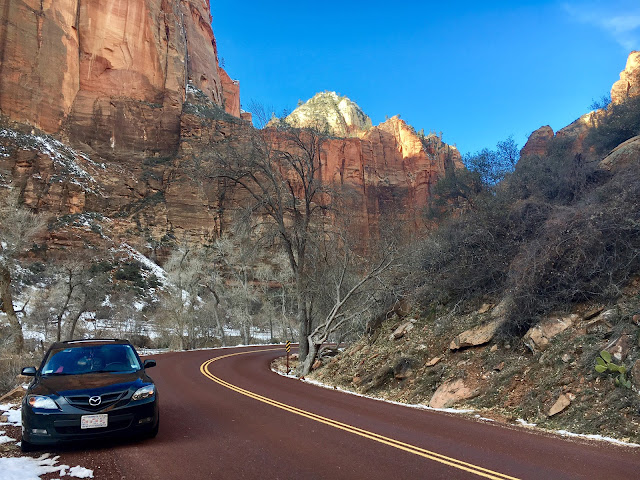 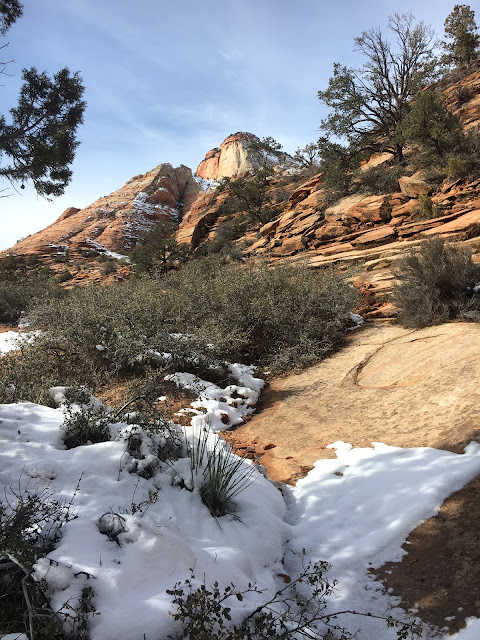 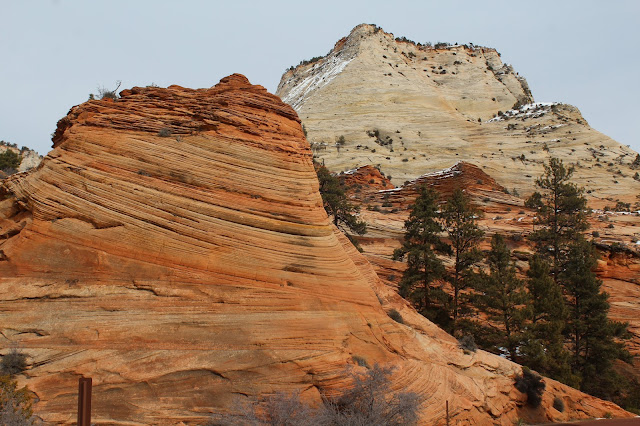 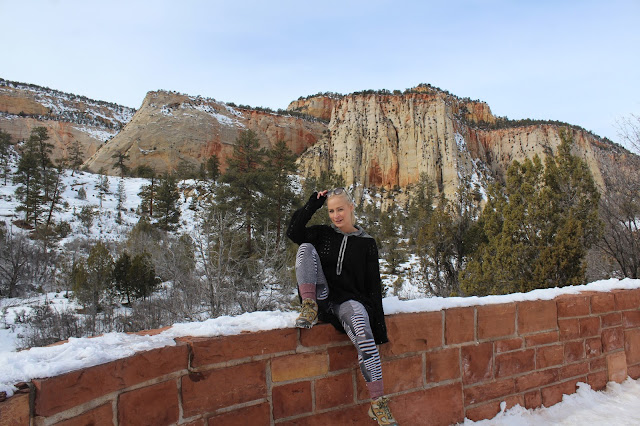 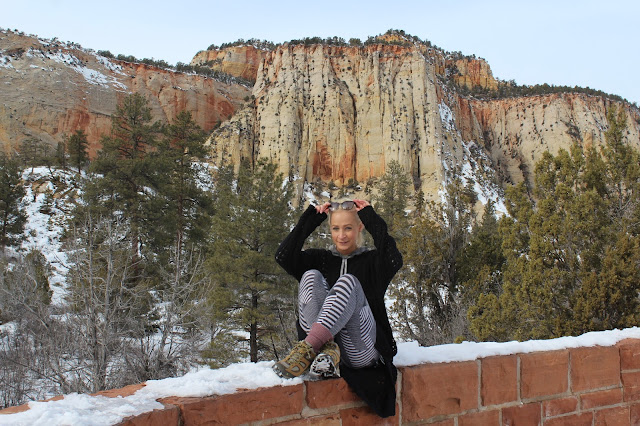 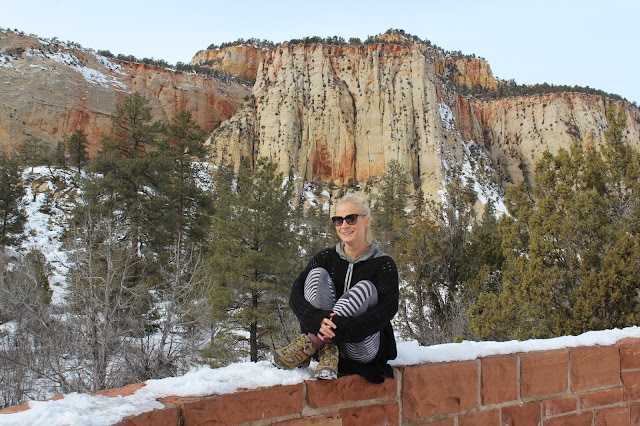 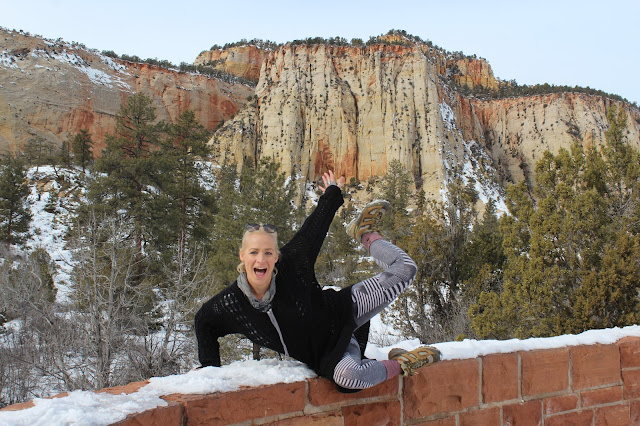 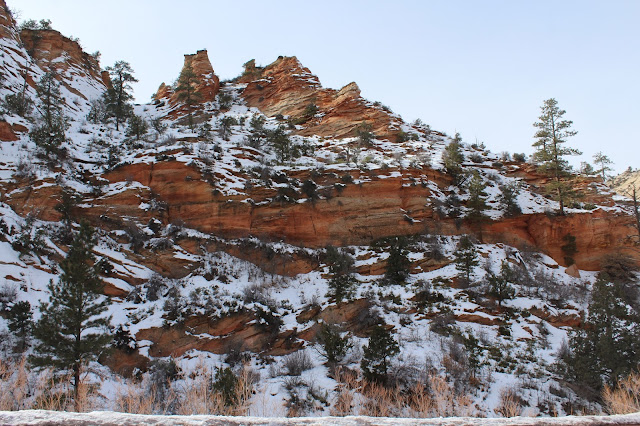 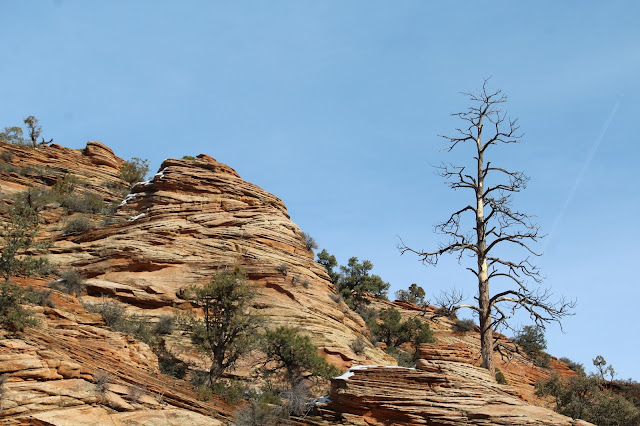 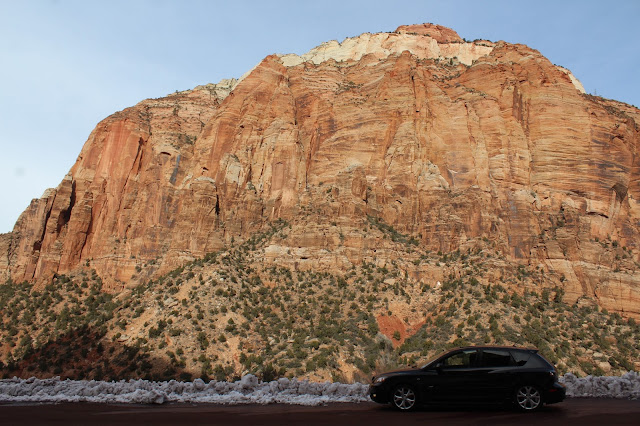 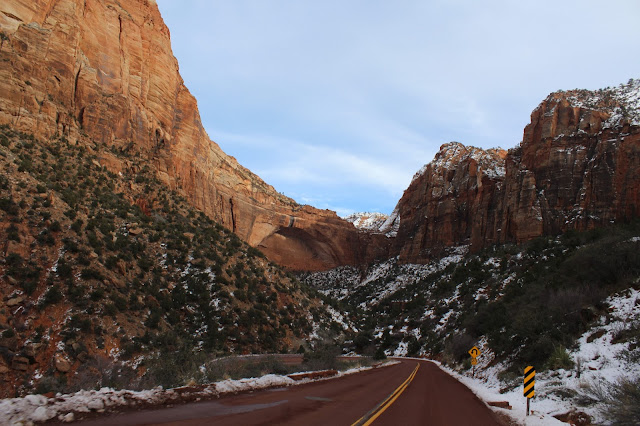 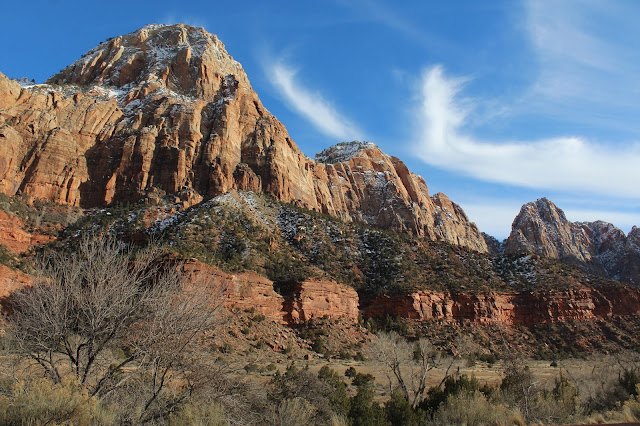 I left, nearing sunset and decided I would get a headstart on heading to California...

Instead, about and hour later, I walked up to the upper emerald pool area back in Zion, to a man with a red backpack and black hat standing, staring up at the rocks, dangling with ice-cycles. It was the kind of scene you see in movies. The sort of serendipitous moment that never happens in the real life, the kind of un-exaggerated scene that I want my True Love story to begin like.

Unfortunately, this wasn't it. But I wasn't supposed to be there, I had left and turned around an hour or so before, having read a comment on facebook (once I had service outside of the park) telling me to hike the emerald pools trail - the only one I had looked at myself and meant to do but passed it on the way out and figured "meh, forget it." After about 15 minutes of internal debate inside my car, I turned around and went back.

I hiked up the trail, passed the chains where it was closed off to the middle and upper pools due to ice, slid (literally, held onto the railings and just slid... weee) down the trail past the ice and hopped off the other chain. 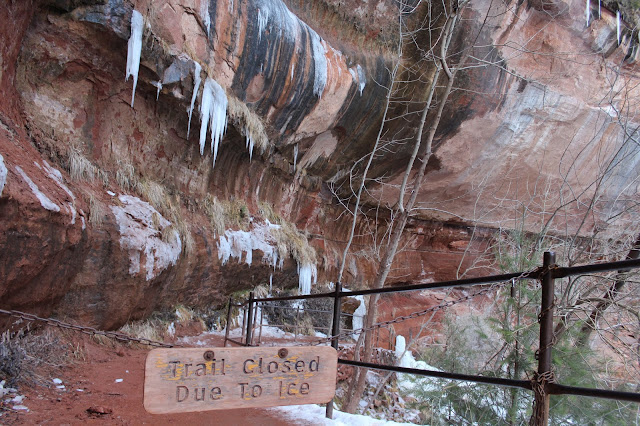 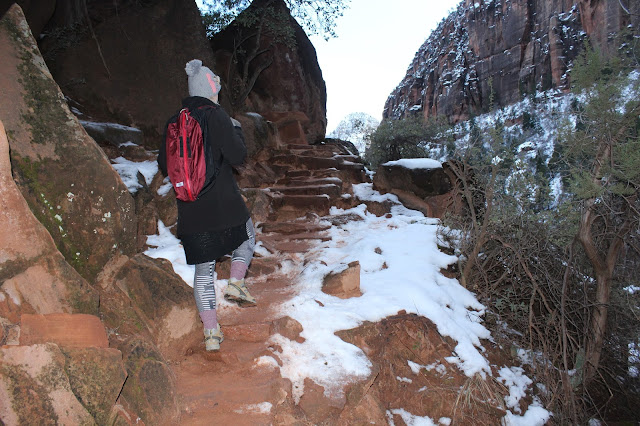 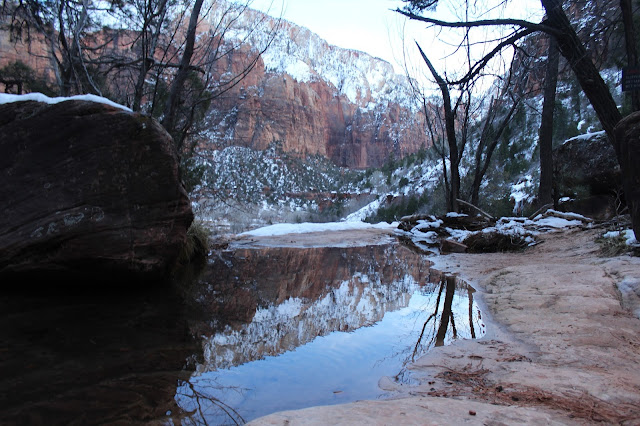 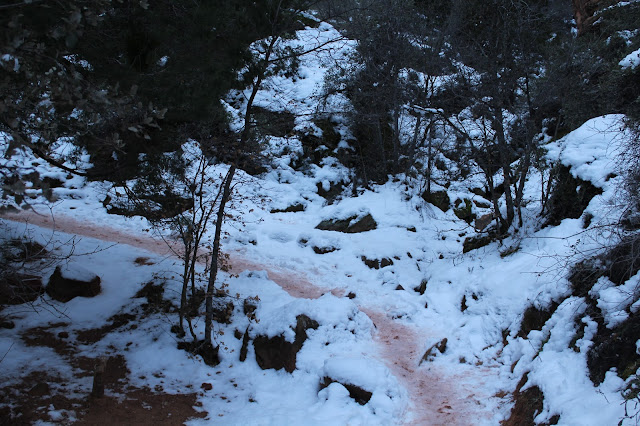 When I finally arrived to the upper pool, I expected to see no one. It was dusk. And I hadn't seen or heard anyone in a while - aside from a couple that passed me going down. We stayed talking by the  upper pool (which at this point, we laughed about being ice and covered in snow - as we were both to we had to do it and now stand, unimpressed watching icicles fall from 3000 feet). 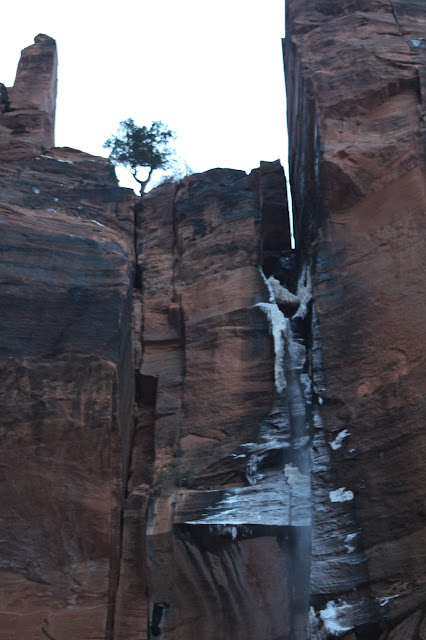 The conversation was great. Oddly, he lives in DC. I seem to keep running into people in DC. I hadn't talked to a sole for longer than 30 seconds all day so it was a welcome relief. Although he kept saying how funny I was and I confessed it was probably just that I haven't held a full conversation since the Brit hit my car a week prior. He asked if I wanted to go to dinner, "Oh but I'm not hitting on you."
"Sure," I said, "but I wouldn't be offended if you were."

I learned his name was Jake. That Jake is a Cancer and 31. I learned that is Mormon. That originally he is from Idaho. Jake doesn't drink, do drugs and is pretty straight laced (obviously). On the walk down, Jake confessed that he came west early to clear is head and think about the relationship he has been in the past two years: He can't decide if she should stay with her. He thought I fell on our hike back down when I did a little jig over this information; it's not that I'm excited he's only sort of happy in a relationship; I just really enjoy talking about interpersonal relationships. I don't know why. It's kind of like how I enjoy putting the pistachio shells back in the bag with the rest of the nuts. We all have our things. It's fine.

I've thought of it before and it occurs to me again, that perhaps I'm in and out of lives on my trip to make a difference in their lives - not anyone in mine. I asked him questions. Gave him the "advice" I could. And then he made me pinky swore that we would be friends. Over dinner, we talked more. About his girlfriend; about life; about choices. Everything, really. About being single and in your thirties; he thinks, logically, he should give her a go because he "gave up" on relationships before, but I don't think that's fair for people to reach a certain age and settle for anything less than spectacular. He asked me what I was looking for in a partner and I could think of was the same old thing: someone that makes me laugh; someone that makes me a better version of myself ... oh, and blue eyes and brown hair.

"Well," he laughed, shaking his head as if his brown hair would move in the wind, "I've got that covered."Dinner ended a couple of hours and many words later. We hugged, implored one another to stay in touch. And in the end, the only advice I can think to give him is: Follow your heart.
Posted by Hatching West at 9:03 PM