I returned from Arizona, confident in something but I wasn't really sure what. As far as I knew, the single dad [I had been seeing] was over [which was fine; he just kind of stop contacting me and I let him] and I had a sort of direction again. Since my plan to move to Seattle had recently been set ascew by an unexpected turn of events in the life of my girlfriend, whom I was going to stay with there while I got settled, which sent her back to the east coast.) Now, I thought: I could live in Arizona.

Five days later, it was Valentine's day. I was single - oh, so single - but I didn't mind. I enjoyed a "galentine's" celebration of junk food and wine with my cousin and her friends that she had set up. While lying on the couch in my pink zebra onsie with the other girls, wine, some potato chips, and a dog, I hopped back on Tinder - which I had been avoiding for months - passing the time during an on-coming snowstorm, while half-listening to 20-somethings lement about life and failed love.

On Tinder, a man showed up with a beard, green eyes and 6'. I swiped right, naturally, after checking to make sure he was local. I had turned my Tinder on for about 30 seconds while in Phoenix to show my host my profile, curious if he approved. I doubted anyone swiped me in that 30 seconds, but wanted to make sure. This was was 23 miles away, so it was a go.

The following day, the guy messaged me. I checked again to make sure he was local: 23 miles. I messaged back. He had the same name as my dad, so I renamed him: Walter. Almost immediately, and without reason, I began to refer to him as my 'husband' to my cousin and housemates. They laughed, but I just kept calling him that, unsure if I would ever speak to him after that day. Although, after an hour of conversation, I learned that Walter was from here originally and had moved to Arizone two yers ago. He offered to help me move across the country - since his family was still here, he would be back in May.

He was my sign from the universe!, I told him, surprised he didn't flinch in response. So perhaps then, that was my reason. But still, it was silly, yet the closest I'd ever come to the kind of thing when someone says, "when you know, you know." I knew. (Or so I thought. I think when people say this, what they really mean is "I hoped really hard s/he was it.")

For three weeks we talked every day. We facetimed. We exchanged a million photos and selfies. We had our first "date" watching "Theory of Everything" together via chat. We planned to meet the the second week in March when he was in town for work. He was complimentary and curious about me. He was funny and clever and I didn't have to explain Internet jokes. He had a job and a degree and seemed to fill of of the things on my "List". I was infatuated. I gushed in my head and aloud said almost nothing, but probably more than I thought. Fuck, was I interested. I went home for a weekend and told my mom and sister when they asked who I was texting, even though earlier that week he'd begun to text less.

I had asked him what was up with texting less and he said he was busy with work and this charity case kid that lived with him. I told him I didn't want to add to his stress, so I could leave him be. He told me "You're not. At all!" and carried on more with a conversation. Everything was copasetic. In a conversation after that, I told him I remember lots of dreams after he said he didn't. He told me to dream of him and said I'd see what I could do.

Days later, on March 4, the last snowstorm of the winter hit. That night I had a dream. He was in it. I woke up and wrote it down so I could tell him what it was: I was sitting down at a desk in front of a PC. An old photo came up of some weird outfit (can remember the outfit or its reason). You were standing in the room while I was pissing about on facebook and you saw a picture of me and made fun. I said, "If you think that one's bad, you should have seen yesterday's." So you walked towards me and came up behind me - I presumed to click through to find the picture - and I was smug because I knew the photos were only on my phone and not the computer, so I was just going to let you fruitlessly search. Only when  you came up behind me, instead of grabbing the mouse, you put your head around/above mine and kissed me so well that I forgot what words were.

He texted me later that afternoon. "I had a dream about you," I said.

He sent back a selfie with a surprised face, "Omgah. Lay it on me!" Then followed up with a picture I had requested the night before of him in a suit.

"So young!" I responded.

"haha. that was like...4 years ago? 5 maybe." And then that's the last thing he said to me. Without reason, Walter, this perfect man who the idea of I was falling for, disappeared. It made no sense. Just days earlier I told him I'd go away to not add to his stress. I didn't say anything wrong. I never even got to tell him my dream. The only sensical conclusion, after he had offered me to stay in his house and made plans on where to put my dream piece of furniture (a chaise and a half), was that something bad had happened. I was in a sort of terrified panic because of this near stranger.

He didn't respond when I texted three days later, "Getting worried over here. Please let me know you're alright." He didn't pick up his phone when I called once two days after that. Or when my friend called trying to help me stop wondering if I was the only one who knew he'd disappeared. (I didn't ask her to.) I began to call hopitals. I inquired to my mother and friends as to what to do. My mother said to contact his family - not that I really knew who his family was - but, even for me, that seemed too far. I am a hopeless romantic, yes, but I am also a realist cynic. I couldn't call the police or anything beyond something not traceable because I'm not quite that crazy. And I didn't know this guy. Maybe he was just playing games. Maybe he had a girlfriend that came back and he just ditched me because his balls got lost somewhere in his 20s.

So I just continued to check his reddit handle here and there. I had randomly - with little reason - asked what it was three weeks prior. Twelve days after he disappeared, after I had spent time searching news reports for accidents and obits for deaths and hospitals for his occupancy, I saw thislittle turd post something about Keanu Reeves shoes on reddit. That little fucking prick ghosted on me. I wrote this: 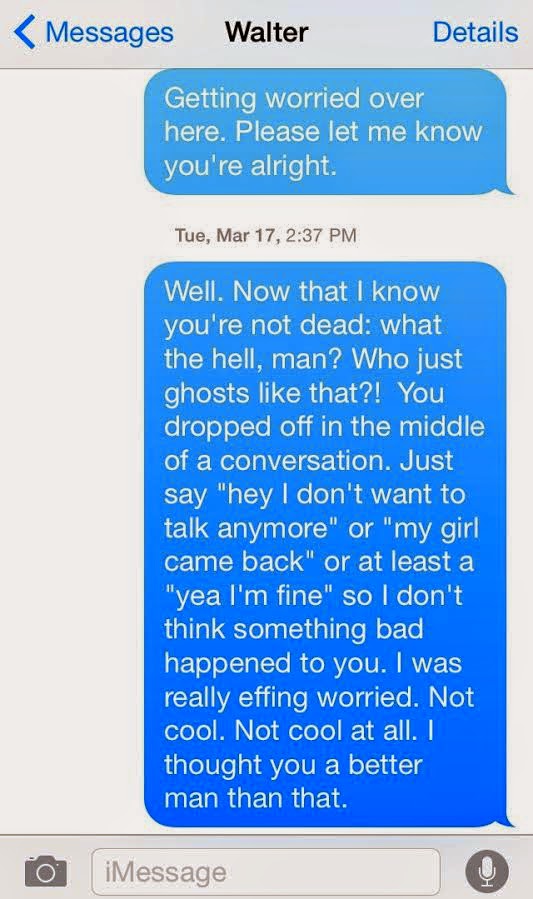 That felt good to write. It felt good to know he was not dead. I was so fucking releived and also pretty pissed he let me get involved. I was livid with him, ready to mail off a glitter bomb to the address my friend creepily PI found when I was like HE MIGHT BE DEAD BUT I DON'T KNOW WHAT DO I DO, but as time passed, I cooled down (sans glitter bomb, even though it amused the hell out of my mom) and was more upset that I let myself get that involved and affected by someone I'd yet to meet. It was completely unexpected. And my own reaction to it all surprised even me. After the relvery of relief, I became disinfranchinsed with the whole single, dating, love, blah blah thing.

For a few days, I mulled over the idea that I had become so stupidly invested in someone I barely knew. In the idea that this guy could be my husband. I lost my hope in those 12 days of mysterious vanish. I thought the universe had put all of those things together, to lead me to something I lost before I had it. It was less about him and more about this arduous journey leading to nothing. It was a slow build up and sudden downpour of realization after that text, that I knew what I needed to do: I needed to stop focusing on this search for love or partnership or whatever it is I have come to beleive SHOULD be my next step. It was fucking stupid. Foolish. Stupid. Pointless. And a little weird. He pulled an incredibly dick move (guys, seriously, grow the fuck up), but really, when the dust settled, I was the only one left to blame. I can only control my actions: I beleived too much, too soon, with blind faith, hope and this idea of what I thought I wanted to happen next would happen (perhaps, or only because, I wanted it to), but life isn't like that.

Since then, there has been a paradigm shift. My focus now lies primarily on me. Love outside of myself isn't much of a consideration; more of a peripheral concern for future me. My hope is not lost, simply re-adjusted. I have been focusing on all of the wrong things; things not under my control; things that should matter far less than the clout I had mistakenly afforded to them. I need to focus and rely more on myself. It took some silly prick, but I learned that lesson and with good timing too...

Because I have a new plan now and it's tricky and terrifying and awesome - now that Seattle is a wash - though I need to take a moment to fill you in on that too...  (I apologize for my long absence. I have much more to catch up on now. I'll be back much sooner than later.)

Posted by Hatching West at 2:35 PM