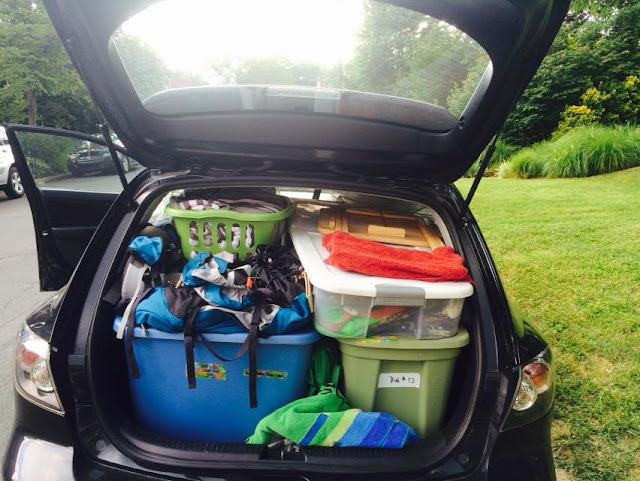 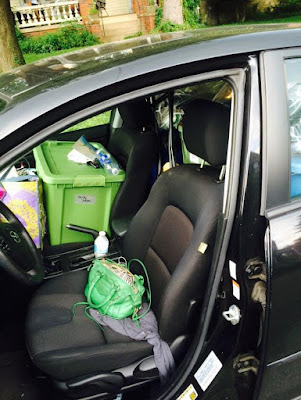 I did end up signing up for a gofundme account, per the suggestion of my friend, which if there are any stranger readers out there, please feel more than free to contribute. i offer my gratitude in the form of virtual hugs. This is how I feel today, a FB update to my page-o-begging:

I'm homeless in 30 days. Holy balls! I'm not going to lie and say I'm not anxious or apprehensive. I am. So far I have saved enough to cover 1.5 months of vagabonding. But I wouldn't be able to say that without the help of my amazing friends and family (and friends and family of friends) who have donated thus far. I honestly can't thank them enough. More than the money, it serves as an uplifting feeling of support (a virtual hug or high five, if you will) every time I get an email saying I got a new donation (no matter the denomination). Each time, a little stupid smile spreads across my face and my heart warms. That people believe in what I'm doing (or appreciate the notion) enough to take the time (and cash) to donate, means more than I can express. It helps me believe I can (and should) do this on the nights I lie in bed now, completely exhausted and enjoying all of my creature comforts, wondering if this trip is the right choice. Knowing that in days, soon nearing the single digits, I will be voluntarily giving up my comforts, home, and the security of a job in order to search for something I won't know until I find it. Thank you past (and hopefully future) supporters. THANK YOU so much.

The past few weeks packages of random items have been arriving to my house. (Don't judge the pink knife; it was $5 cheaper okay?) Deliveries including a case of butane - that's a normal, every day delivery, right? I took my last trip to my parents house with bins last weekend, filling as many nooks and crannies of my car as I could because I knew whatever doesn't fit next time with all my camp gear and life-out-of-a-car, was going in the garbage. And my nerves begin to rattle as I can no longer say "in a few months" or "next month". Tomorrow it is "this month." This month is the month where everything changes. Hold on to your mother fucking boots, self. 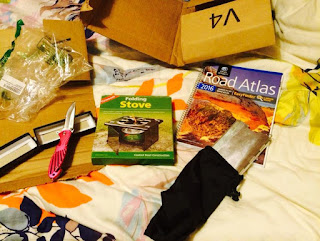 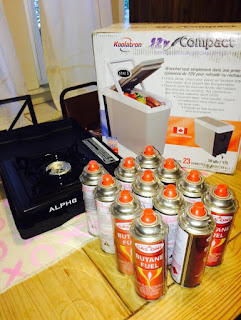 Posted by Hatching West at 10:23 AM No comments:

Email ThisBlogThis!Share to TwitterShare to FacebookShare to Pinterest
Labels: archive 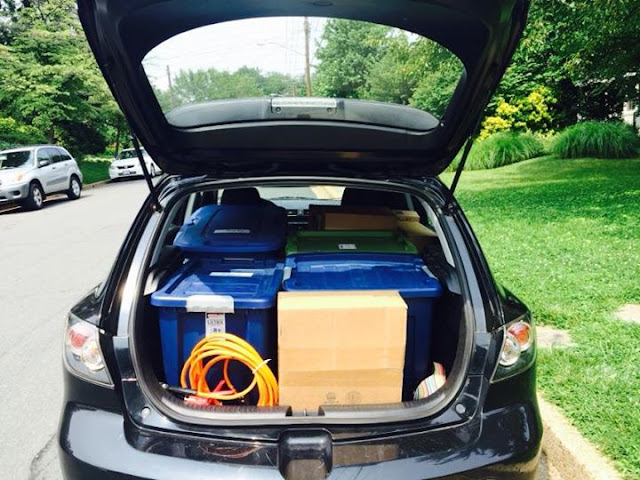 I went home to Pennsylvania for the Fourth of July. I needed to see my sister and her babes before I left for my trip. It was the first of a series of taking bins back to my parents house to store in their shed out back. To my surprise, my step-dad nixed that idea (citing that it was moldy and everything would be ruined) and I was upgraded to a corner in the garage. (Score!) After my mom and I cleaned out 'my' corner, we unloaded the bins I was able to haul up.

(I have since made a second trip with bins, this past weekend, to my aunt's house near me here in Virgina where my parents will take them back to Pennsylvania this weekend. They are coming down for a visit, which unfortunately, I will miss, as I'll be in Boston for the baby shower of my Seattle Senorita. Next weekend I'll drop off another load of bins when I'm back to PA for my other sister and her children. (I'm trying to make the biggest effort possible to see everyone before I leave because chances are I won't be home for Christmas. One sister is in Indiana, the other in Tennessee, so it's hard for everyone to get together.) The last trip of bins will be with me during the last week of August, when I visit for a few days before taking off; hopefully I'll have enough room. I'm really hoping this bin thing goes as planned. But I digress... back to the point...)

On the Fourth, we headed over to my grandparents' for pool, BBQ, and babes. Soon, I learned, that my mom (who tends to spill about everything) hadn't told my grandparents about my plans to travel. My grandfather, 83 and spritely, asked if I was married yet. I told him that was going to be a little tricky considering I am about to be nomadic fo ra number of months. Confused, I offered explanation, which was immediately met with an surprising amount of agitation. He told me: 1. it's not safe! 2. what about money?! my job?! NO JOB LINED UP?!?! WHAT?! 3. it's dangerous! 4. "95% of people die five miles from where they were born!" 5. "you life follows you, you know? you can't run away from your problems. just because you change you location, doesn't mean anything else changes."

"Grandpap, I know. I'm not running away from anything," I responded when he paused to take a breath. "I just want someplace new. I'm perfectly happy in my life, I'm just tired of DC." He repeated that 95% of people die close to home; that no place is going to be better than where I'm from; where family is located. "Perhaps," I said, "but I want to be able to find that out. I'm not saying I'll never come back, all I'm saying is that I want to see all of my options first. I want to be educated on the choices I'm making. I want an adventure before I'm too old to have one." What I meant by that was better explained moments later when my grandmother rejoined the group and inquired as to why grandpap was in such a huff. I told her my plan and added, "In five years, I'll might be married with kids and I won't ever the opportunity to do this again."

Expecting a response similar to my grandfather's from her, she calmly sipped her Coke, thought about it for a moment and instead said, "You're right. This is the only time you can do this. You'll have too many responsibilities later. You have to do it now or never." She had kids in her early twenties: five total over a decade. The idea of me doing this just seemed to click with her. And I appreciated that. My grandfather, not so much, but later that night, I understood why:

My mother explained that as people (specifically men) get older, they want their families around. They realize how important family is and don't want them too far away. His mild outburst of emotion was just his version of a bit of sadness. And probably worry. And I feel bad I'm causing people to have these negative emotions or feelings of worry. But I'm not running away from my family; nor am I running away from my life or any sort of problems. I like to think I'm running towards something - I just don't know what that something is yet...or where.

I left that Tuesday morning to head back to DC. My step-dad and I didn't have a chance to have the chat he wanted (we'll have to cover that next weekend), which he mentioned mid-goodbye hug, "I still want to talk to you about your trip to...," he paused to find the word.

Posted by Hatching West at 10:22 AM No comments: