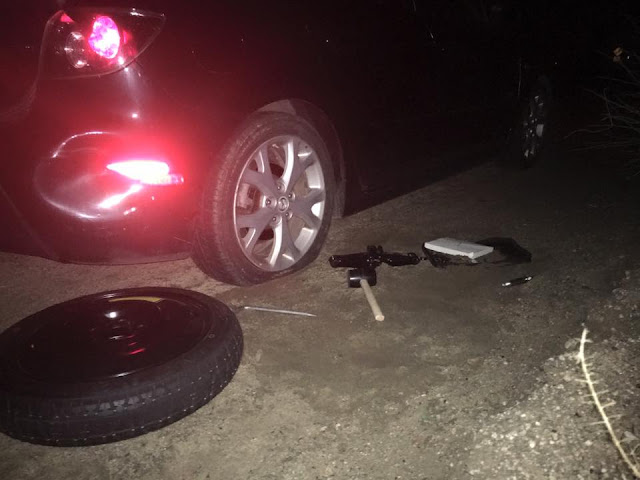 Driving back from Applebee's, I turned up the hill around 12:30a - having made a quick stop at the Wal-Mart to wash my face and brush my teeth with water that wasn't glacially cold - and about two miles from the park entrance I heard a loud noise and then my car began to ding at me. "Fuck," I thought. I pulled over, got out and assessed which of my tires that I was warned wouldn't make it another 5,000 miles (I was currently at 6,900 miles) died. It was the back passenger one.

My mother had given me a can of Fix-a-Flat that I stored in the little hideaway compartment below my truck and above my spare. (This meant I had to take everything out of the back first.) So with half of my life sitting on the side of the road in Joshua Tree, following directions, I shook the shit out of that can in a hopeful - and cold - fervor, attached it to the tire and let it do it's thing. I had used Fix-a-Flat years before, with success but the sound coming out of this situation was different than I recalled. I bent my head around the tire to realize all of the white foam was coming out the backside. Fuck.

Step 2: Try to put on the spare. I had never done this before - despite having assisted my dad in replacing a gas tank and changing my oil as a teenager, as well having grown up with him owning detail and used car garages. The past two flats I had the assistance of my CEO and housemates for, but I made sure to take note of their steps in the process. "I got this," I concluded with my half frozen fingers. I pulled all of the items out of my trunk for the spare, and my jack and manual from the side compartment. Following the manual, I attempted to loosen the lug nuts before jacking up the car. I got one loose. ONE. I really tried too; I used my hands, then my feet, then I tried my tent mallet. They were not moving. The independent spirit I have built along this journey gave way to the knowledgeable spirit that has also developed, knowing when it's time to ask for help. I called AAA.

Being in the middle of nowhere, and dispatching to a Pennsylvania center based on my phone number, it took a while for them to get to me. While I waited, I documented my troubles on facebook - which surprised me since I was in a really spotty service area and about to lose service altogether. I was thankful, however, that my tire blew where it did and not a few miles more. Because a few miles more meant that I didn't have service to call AAA. And at 1am, no one was around. In short, I would have been screwed. Cold...and screwed (having set up my tent with sleep pad and warm bag waiting for me inside the park.)

About an hour later, the tow truck came. I told him my short story, which, to him, read as: Feeble Female Can't Loosen Simple Metal Screw. Meanwhile, it was so cold, I had dug out my Magic Coat.
He looked at me in my out of place 70s coat, fur lined hood up and all, then looked at all of my belongings strewn about, including a bag of bicycle, two 'dead hooker bags', and my spare and tools, including the manual.

"What on earth of your doing with a sledgehammer?!" he exclaimed in a giggle.

"It's a tent mallet. I was trying to knock the lugnuts loose," I explained as he bent down to put his jack under the car.

"You got your manual out," he laughed. He was starting to get on my nerves, but assuming that I had aroused him out of a nice, warm slumber for this and he was helping me, I bit my tongue. He began to go to work. It took him about five minutes to do what I had struggled with for over a half an hour.

He stuck around to talk with me and smoke a cigarette as he watched in amusement while I piled everything back in my car, now including a 17" wheel with a busted tire attached. He announced that he didn't think I was going to fit everything back in there, while he puffed. Obviously, he was of no help when I was hoisting my 100 pound duffle bags back into the car. While I did this, I asked him about tire places in Yucca Valley. "You-ca?!," he laughed, apparently making fun of my pronunciation, "It's Yuck-ca."

"I don't know. I'm not from around here," I replied, now irritated by the 2am taunting.

He looked me up and down, in my - in the current situation - ridiculous, Magic Coat, let out another puff of smoke and guffed, "Well that's obvious." I then inquired and learned my tire shop choices were limited and decided to go with Wal-Mart, begrudgingly, because it appeared to be the only chain. This means the only place in town I could return to anywhere if something went wrong with their work in my migrating miles.


A few minutes later, with all of my stuff packed in incredible disorganization - minus my 2nd folding chair that I had been driving around and had been annoying me every time I had to move it to make my trunk into a bed. I donated my nearly unused chair to the tow truck guy and considered it my 'tip'. Then, I was heading back up the hill into the park...slowly. I was very anxious about the prospect of my left bald tire, having now seen just what the guy in Reno was talking about - also blowing up, but this time with no phone or spare for assistance. Around 3am, I finally ambled into the tent I had set up 10 hours prior - although now it was about 30 degrees colder, temps hovering around freezing - and fell asleep. I would deal with having to replace two tires tomorrow - err today.
Posted by Hatching West at 5:20 PM