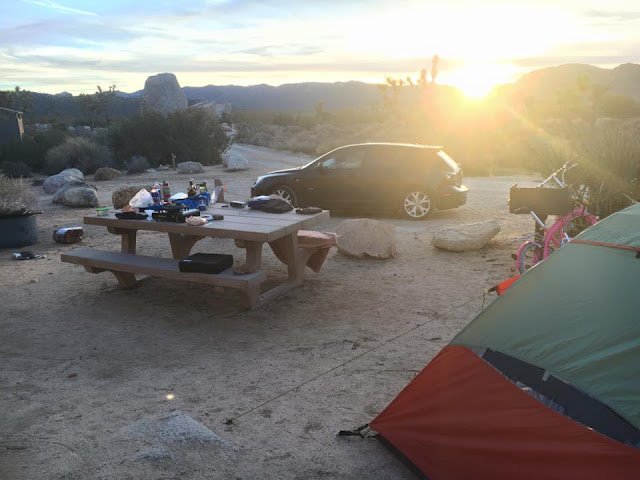 I awoke around 9am. It was sunny and warm and bright and gorgeous and everything I'd been missing since the Pacific North West. I spent the day reorganizing my car and moving the larger items (the huge duffles and my bicycles) to my campsite, having read that my spare was meant to bear no more than 565 pounds. This took more hours than I had assumed, and having missed the sun, I decided to take it easy after that. I took a 'bath' in the fire-pit with my collapsible dish bucket and an extra gallon of water I'd picked up at Wal-Mart. Normally, I wouldn't use purchased water for a cleanse, but it had been a couple of days and I couldn't use the showers in town I had found because I needed to minimize use of my tires until they got fixed and it was obvious I wasn't making it back into town until tomorrow. 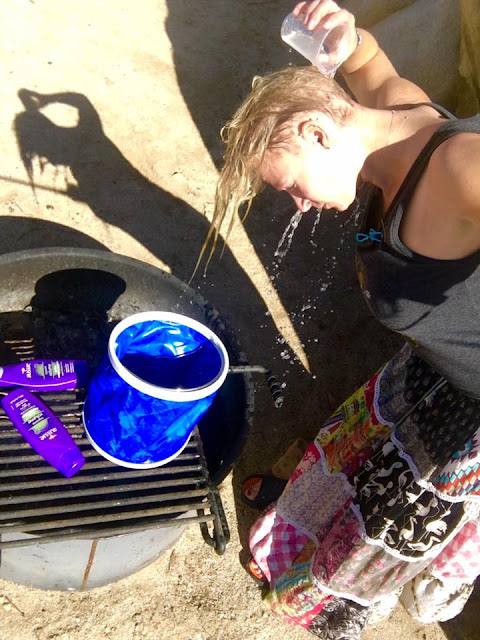 Near dusk, the group next to me returned from their day of climbing. (I was previously unaware that Joshua Tree is a climbing mecca.) It was an older gentleman, his daughter and - what I first assumed was - his son. This is what I surmised from eavesdropping on their conversation earlier in the day. By the time they returned, I had shuffled everything from my car to my tent (my bike tethered to the grill), and the older man in his mid to late 50s, commented on how organized I was. He talked and talked, mainly about himself and kept bringing up the fact that  he lived in Whistler like I should care, until the sun had set into an unbelievable hue of red, excusing myself to take photos. 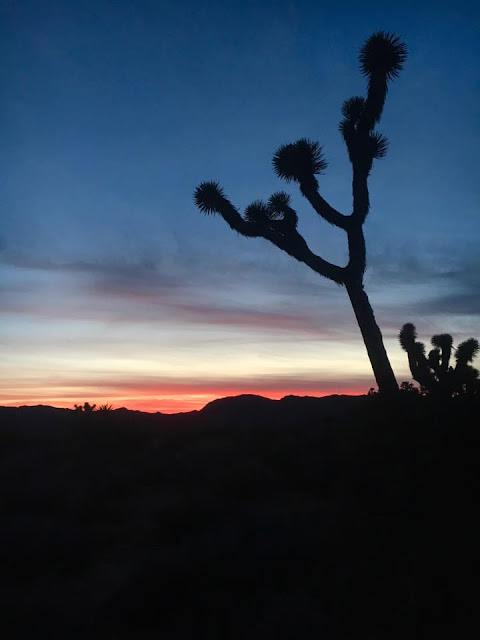 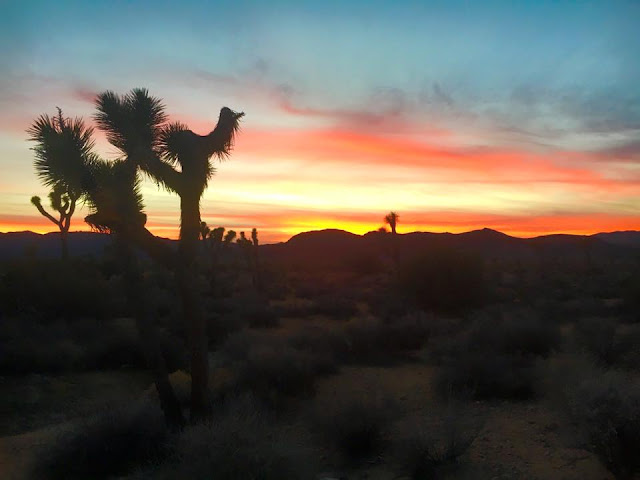 He then followed me and offered to take a photo in front of the sunset. I relented. He then invited me to partake in their fire. I had wood; I didn't need it, but briefly considered it based on the fact that I had enough wood for about 2 hours of fire at $5 a bundle and lots of decisions are made based on money.

I decided against hanging out with them. Instead, I made my dinner with what I had in my car: chicken tacos with tomato, feta and avocado on corn tortillas. Not bad, I thought. (In fact, they were delicious.) Then a van came by and asked if the site nestled behind theirs was open. They said it wasn't and I thought this was wrong; it's the second time I'd heard them say it was occupied. So I walked over to camp three - which meant I walked through their camp - to prove a point.

From there, Ian sucked me into his vortex of narcissistic story tellings (and oft mentioned Whistler dwelling). I could tell this was the case when he went into a diatribe about the time he was detained in Barcelona and his daughter, Zoey, nudged her boyfriend and announced "You should actually listen to this one." This man talks so much that the boyfriend doesn't even feign interest anymore and the daughter openly announced she stopped listening years ago. A story that could have easily been 5 minutes was stretched out for 20 and I was trying to think of a way to escape.

To change the subject, I commented that they were making a 'fancy' dinner. They weren't. It was spaghetti with "roasted" vegetables. Ian chimed in, "Well, he's been on the road now for five years!"

They boyfriend, in an incredibly cocky tone announced, "Yea, after 5 years, you get good at it." Like one day, 4.5 years down the line, I could hope to boil noodles and foil-steam vegetables too.

In my mind, I rolled my eyes. In reality I feigned interest. It took everything in me not to say, "bitch I just had chicken tacos with fresh veggies and feta. Maybe one day you can graduate from noodles." In reality, I said nothing.

Zoey and the boyfriend, being in their early 20s, thought that they knew everything. This, entirely based on places they had been, but not really anything that they had done (or overcome). Tinder has taught me that anyone who lists all of the places they have been, have little else to offer in terms of interest or personality. They also had the combined personality and appeal of a pineapple. (And I despise pineapple.) As I sat there, listening to Ian talk at people, it became increasingly obvious that both Zoey and the boyfriend had their travels funded for them by their parents; having grown up in privilege and deciding to 'strike free', which when you think about it is incredibly ironic and paradoxical, but I digress.

Soon after they finished eating, Zoey and the boyfriend announced they were going on a walk. I found this to be odd; it was like one of those moments  in a movie when people think two strangers are getting along and they want to give them 'alone time.' Naturally, I tossed aside this notion and figured they were just as tired as I was becoming of listening to Ian's 'stories. and wanted to leave. Once they left Ian, surprisingly, began to ask me a few questions about myself, which I answered.

As much as I wanted to go lay in my own tent, I thought it would be impolite to excuse myself. (I am the worst depart-er; I always leave late because I can't figure out a good, polite exit strategy.) We talked for about another hour; he asked what I wanted out of life; why I was traveling; if I planned to marry, have kids; what would the wedding be like? This, in particular, seemed like an odd line of questioning, but he struck me as effeminate at first anyway, so I played along.

I told him the kind of low-key wedding I wanted: backyard, kegs, BBQ. "And a s'more's bar!" I added, excited for my own personal revelation of this genius.

"Would we have different kinds of chocolate?!" Ian inquired.

Taken aback, assuming he was using 'we' in the royal sense, I carried on, "No, I think just milk chocolate. Maybe dark."

"I was thinking white," he responded.

"And what about the BBQ. What kind of meat. Pulled pork?!"

"I love it," I said. Like, duh, who doesn't. Even a friend got married this past summer; two Jews, and the only protein they had was pulled pork. I told him this as well.

"Me too!" he exclaimed, in a forced excitement and then got up off of his log and leaned over towards the rock I was sitting on to his left.

I leaned right. He stood up a bit more to get further towards me. I leaned right again until I was parallel with the ground, put of my right hand in defense and queried, "What are you doing?"

"I was excited about the pulled pork. I wanted to give you a pulled pork kiss," he said matter-of-factly... and as if that were a thing.

I stayed for a few more minutes, trying to move past this really uncomfortable moment and wondering go myself: "Did he just spend this whole time thinking he was going to win me over?" He is almost twice my age, completely gray and about half an inch taller than me. "ON WHAT PLANET!?" I wanted to exclaim. Instead, I announced that I was going to turn in, didn't say another word.

I slept with my stun gun close to me that night. And, when I saw the three of them in the morning, didn't so much as make eye contact. He didn't either. And then he left to go back to Whistler. And Zoey and her boyfriend went back to living in a cave. Good.

A quick note to men in their 50s: Don't try to make out with women young enough to be your child - especially over a love of pulled pork. That's strange.
Posted by Hatching West at 11:08 PM