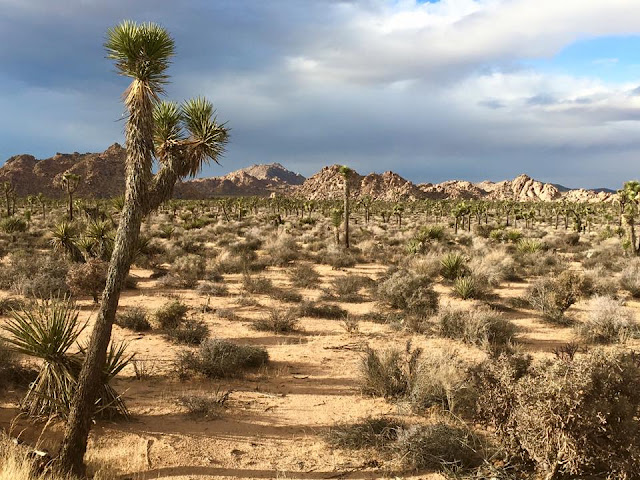 I woke up, now Thursday, and seeing as though I planned to leave Joshua Tree on Sunday, it was time to drive out of the park and into "town" for cell reception, as the park has exactly "NO SERVICE," and see about those new tires.

Since I left, I've always had this inclination to pick up hitchhikers in parks - not the general hobo, scary ones, but park people - just regular traveler nomads. Parks seem to have a different air about them than the general world; safer, cleaner, more trustworthy. Or maybe that's the world in general, but we're too busy being scared by mainstream media and 24 hour news sources. Unfortunately for me (or fortunately, perhaps) my car doesn't have room for another human unless you "curl up into a ball," as I put it, in the front seat and good luck finding room to put any belongings you may have with you. Needless to say, I had not acted on my inclination to help out a fellow traveler.

However, since my car was halfway emptied, I had some space. So when I passed a kid in his early 20s, just outside the Hidden Valley campsite (the one I planned to use, but it was full - later I would discover this was the 'rock climbers haven' and also that it's prime climbing season here at JT), I realized I had some space in the car for him if I shuffled some stuff and he sat in the trunk. So I reversed and picked him up. Had I known what was about to happen, I probably wouldn't have stopped.

His name was Reid. I had been biking the west coast for the past eight months and last night a packrat stole his glasses while he slept in a pseudo-cave located in Hidden Valley called the Persian Room. He needed to go to town to make an appointment with an optometrist for new glasses (and couldn't bike down because he couldn't see). I was heading down to shower, make a call to Wal-Mart to make sure they had time for my tires today and, ideally, get some new rubber on The Steed.
All of this was discussed while we drove 14 miles to the North Gate in Joshua Tree. When I arrived, the Ranger asked me if I was Heidi. "No," I replied, preoccupied with looking for my Federal Park Pass to show her.

"Oh," she said, explaining her question, "There is a mom looking for her daughter who drives a black Mazda3 hatchback."

Shit, I thought immediately, please don't say you just got my name wrong and it is my mom looking for me. Now half flustered - and with Reid in the back thinking she asked if someone was hiding - I'm still looking for my wallet (which ended up being on my lap under my purse as I had anticipated the need for it at the gate, but then forgot) - she came back after checking the name and asked my correct name. "Yessssss," I said, half embarrassed, half dreading the familial backlash, "that's me."

"Well," she giggled a bit, "Call your mother. She called the Police who told her to call us and she thinks you're missing." She then announced to the other woman in the kiosk that she had found me. And then proceeded to radio the entire park ranger system.

And that's how I found out I was a missing persons. As soon as I had service again, I called my mother and got her voicemail: Hi mom. It's me. I'm not missing. Just like Yellowstone, the Federal Parks do not have service.  Please stop panicking. I'm fine. And then I texted her. I then called my father, who pulled the guilt train into the station telling me that my mother was worried sick and it wasn't okay what I did. That I'm 32 and I should know better.

What exactly did I do?!, I wondered. It didn't even occur to me that posting a photo saying that I was waiting for AAA to help me and then entering a park for 24 hours would prompt my mother to go into a frenzy and report me missing to the Yucca Valley Police and, in turn, to the Joshua Tree National Park Rangers. I had (wrongly) assumed that by now people could see that what I was doing was no more dangerous than driving to work or going out for a drink in DC (as I had done for the past decade). A while later, my mom texted me back: She thought I had been eaten by wolves. WOLVES! Suffice to say the amount of logic in her theory lies in how many wolves inhabit Joshua Tree, which is zero. Coyotes only - and I'd only seen the one, which seemed friendly and skittish and patrolled the campsite looking for treats. (I have named him or her Sunshine.) 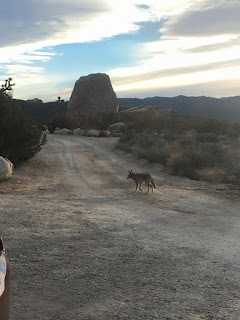 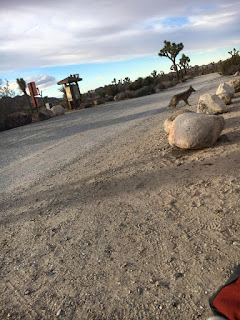 From this, my mother decided: 1. I need to quit traveling to calm her worries and 2. I needed to call her every day. Their guilt was working; it ate into me for the better part of my day until I realized that I cannot be held responsible for managing someone else's anxiety; I can't not live my life to the fullest because of someone's propensity to worry. I understand that the concern comes from a place of love,  but I cannot live my life to the fullest being bound by the fear and frustrations of others. I am not afraid; I have learned to trust the unknown.

Once all of that was cleared up and I was no longer a Missing Persons, I called Wal-Mart who informed me that they had to special order the tires and the soonest they would be in would be Monday. Monday! Begrudgingly, I had him order the tires (what choice did I have). I took a  shower in the 'bath house" connected to the Cactus Corner general store at the bottom of the hill from the park entrance. I paid $7 dollars and Reid patiently waited while I had a proper shower for the first time in days. Afterward, Reid and I went to Wal-Mart anyway for supplies - especially since I now had to get enough to last me through the weekend and there was no running water in the park and I had to severely limit my driving on the donut tire. 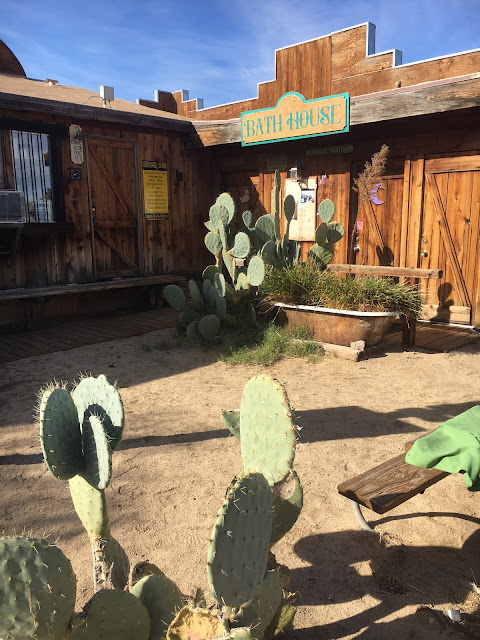 After stocking up, we came back and stopped at the Cactus Corner again in to use the outlets on their porch to charge our electronics before heading back into the park for sunset. (JT has the most AMAZING sunsets and stargazing.) Seated there was a guy, my age, who introduced himself as Tyler. Tyler was a commercial fisherman, working for himself but looking to live in the area - as LA is too expensive and he is an avid climber. I told Tyler - and then Reid joined in too to mention that - I climb and was in need of a partner if he had the gear. Tyler told me to come down to Hidden Valley site 8 at 8:30am and look for the red tent, if I felt like climbing.

Attention turned to Reid's glasses and I said I could give him my extra pair, but they would be too strong. Turns out, they were almost just right. (Wow. He really couldn't see!) We said goodbye to Tyler and then Reid and I were off, back up the hill - but only after I told my mother I was heading back into no service land, of course.

When I dropped Reid off at 'his' site (which was really a 60 something - as they affectionately call themselves - "dirtbag" named John's site that Reid was bumming space from and sleeping in the Persian Room cave) he offered to introduce me to everyone. I accepted, which turned into me staying for dinner: Tri-tip in John's dutchie with carrots and potatoes. It was absolutely delicious and I couldn't say 'thank you' enough. They were all incredibly welcoming... except Kathleigh.

Kathleigh judged me for having a plastic cup I used to transport ice earlier from the gas station. "Who's is this?" she scorned. I owned up and felt so small. I already felt out of place. Watching all of these older folks around the fire, I felt inferior; like an impostor. These folks with their vans and dutchies and no plastic cups were there real campers, the true travelers and I was just a faker. 'New money," a pretender; that's how I felt, anyway.

Until Kathleigh, a twenty something townie - from whom I got the impression she desperately wanted to prove she belonged and unending about about her 'trailer' - judged me for a plastic cup. I have come to find that there is an odd amount of strange snobbery that sometimes lies in these communities.  In my mind - and gently aloud - I explained my choice to her. And in my mind, realized that she had no room to judge me, as I realized my place in this vagabonding world. I'm in a tent. I've gone over 17,000 miles. My car is my home. I washed my hair in a firepit yesterday. I am a dirtbag! - a self-revelation: These people are my people. And I belong.
Posted by Hatching West at 3:47 PM