The wind is a bitch: Day 2. (See images at bottom of post for proof.) Only this time, my tent actually collapsed. I wanted to finish a chapter in the book I started reading in loo of my nightly Netflix, before I moved on with my day, but the stupid wind thwarted my plans. It was then that I discovered what the little Velcro tabs on the inside of the fly are for: So that your poles don't go all cattywompus in the wind. I packed up and emptied out my limp tent then took it down and headed to the showers.

On this day I learned that when I have to pay for my shower and it is timed and the wind is blowing in the shower curtain with it's cold air, I can take a shower in 4 minutes. This, in yet another green-turned-seasoned moment, meant that I had to stand in the luke warm water for another 4 minutes while I waited for it to time out and turn off. 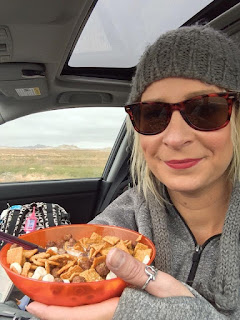 I headed to the visitor's center, grabbed myself a pin (pins became my collection thing by happenstance, really), learned Interior (a town of like four next to the Badlands) had a gas station and headed on my way through Buffalo Gap Grassland to Rapid City -with a quick side road stop to pour myself a bowl of cereal. (It is surprisingly easy to eat a bowl of cereal while driving.)

Unaware of what I was going to do next, and with no internet connection, I spent a minute in Rapid City running errands while trying to figure out my next move: Dollar General for supplies, washer fluid, rising the plethora of dead bugs off of my car (seasoning myself some more, I realized the flies were so awful in Fargo because they like the bug carcasses), and dropped by K-Mart to look for a cheap pair of leisure tennis shoes of all things I thought of in preparation, I missed every day shoes I can wear socks with). And I found some adorable ones (pictured below)! It's the little things.

I looked at a map I was given by the lady in the hotel in Mobridge, South Dakota when I almost caved and got a room but they had no vacancy. "Mt. Rushmore": I had been there before 20 years ago, but I thought "oh hell, why not." That seems to be a general theme I have here. 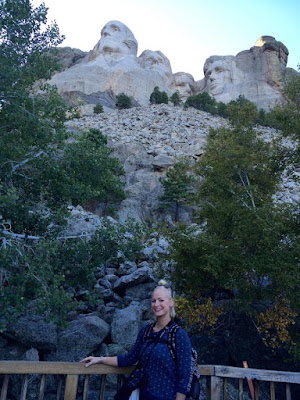 I made a quick stop into the movie set for "Dances with Wolves" then kept driving up the mountain. When I got there, I brushed my teeth in the bathroom before walking up to the monument. My life is growing in the number of situations I never really thought I'd see myself in: While looking in the bathroom mirror of a national landmark as I brushed my teeth, I realized this was one of them. After Mount Rushmore, the map said Crazy Horse mountain. With still no Internet and no idea what this was, I followed signs and the map to that. It's another carving in the side of the mountain - but I couldn't spend another $11 to enter a park today, so I had to pass and said maybe I'd come back for the laser show. What I really meant was: I'm broke but we'll see.

I wasted some time in Custer just down the road and admired the greenery and landscape before I decided to head back for the laser show. To my surprise, I was given free admission since most everything was closed down. I think it was mostly about it being past season. But I had a little cup of single serve wine I'd picked up in Custer as a treat. 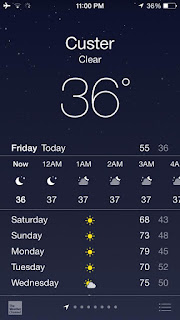 After the show, I decided to stop over-complicating the campsite situation: See Mobridge. I headed to a site 0.3 mile from Crazy Horse. I was the only camper and it was well into the thirties, but despite the nervousness of Gary (and Tootsie, the owners) I had no qualms about sleeping in the cold of the night. I don't know if it is my confidence in what I'm doing growing or pure stupidity, but I slept through the night, ripe and ready for the next day - currently at Hill City having a cup of $1.63 coffee and mooching WiFi. Today, it's back up to North Dakota for Teddy Roosevelt National Park.

I wish I was making better time, every day I feel like I'm chasing light. I always think 'this will be the night I get into camp before sunset,' but have yet to achieve that goal, despite my circadian  clock moving up each day. In a way I feel rushed, but I also don't want to rush myself and move past anything I may was to see or, even worse, rush to the point of not enjoying this. I keep reminding myself to be in the moment and not about what is ahead. Because of all of my extra asides and stop and ohhh shiny objects and Buffalo Museums! I set up in the dark every night. I eat in my tent often and I can't remember the last time I had a hot meal (minus that Wall Drug kid burger - not recommend, but Pro Tip: Order Kids Meals, half the price and  not much smaller), but I'm really enjoying myself.

Yesterday I was thinking that I thought I would have more existentialism, but that I suppose it's difficult because I'm fairly satisfied with myself
(despite inquiry of of older men asking what I was running away from when I told them my plans before I began). Today, I asked the man not to zoom on me when taking my photo at Mt. Rushmore and he said something to the effect of, "Some  people don't know beauty even when its looking back in the mirror."

I responded awkwardly with, "No. I think I'm attractive, but all my photos are close to my face because that's all the longer my arm is" and despite being mildly conceded in response (or perhaps just confident), I realized there is nothing I'm trying to fix by this journey. I'm just here. Admittedly, this trip is everything and nothing I had imagined, but so ful-fulling to feel so self-reliant and know that I can set up a tent in the dark in 8 minutes and sleep soundly in a night that sings 35 degrees into my bones.