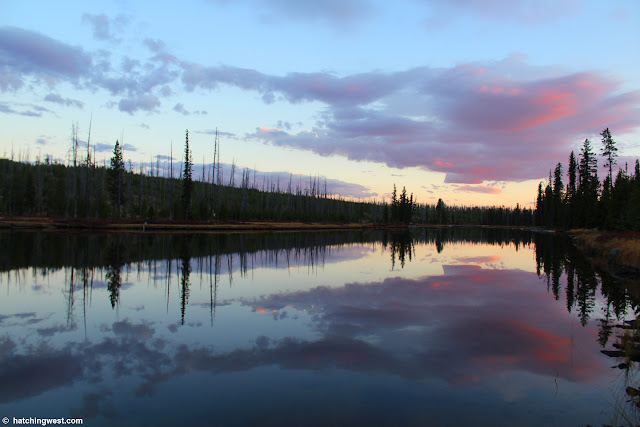 The past two days have been difficult. Difficult and beautiful. I realized after I left the lodge - and tried, futilely, for two hours to find my credit card in my car - that I had lost my credit card. This really got to me. Maybe it was that it had 5% cash back until October 1 on gas and a lot of driving to do in that time; maybe it was that I felt that it was some kind of loss of control (and that a situation that offers little to no control, that's a big deal). Either way, this weighed upon me. I woke up this next morning and spent and additional hour and a half looking for the damn card. Nothing. I decided when I didn't find it, I would drive through the Tetons that day (instead of today) so that I could stop and ask the Rangers if they'd found one. They hadn't, but suggested ask the Grant rangers stations. I would the following morning. But first, I had to nab a tent spot within the park for $15.  I had learned on night one that sites in the park were on a first come first serve basis and I was gonna be damned if I was going to pay another $40 for a night of camping vs. the $15 they change inside the park.


After stopping at the south gate to check for my card, I went back to Lewis Lake (about 23 miles north into the park) to look for it (didn't find it), got a good spot at the Lewis Lake campsite, pitched my tent, deposited my $15 and headed back down and out of the park for the Tetons. As soon as I crossed over into them, I got a barrage of texts, calls and messages that I had missed in and black Internet hole of Yellowstone the day and evening before. I had a FaceTime w my mom - who had freaked out I"d been eaten by a bear since my GPS app she tracks me on alerted her of my service withdraw -  which was nice and well-timed, considering I had talked to nearly no one in the past 30 hours. 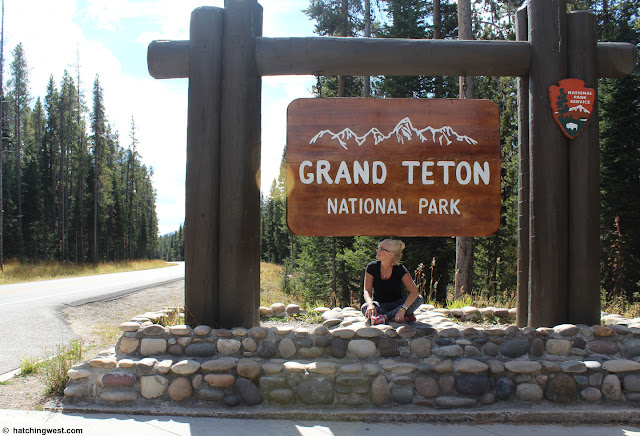 Then, I did the second dumbest thing I've done since I began my trip: I went to fill my tank with gas, got distracted and then drove away after filling my tank with the damn hose still in my car! I heard a weird noise drifting slowly forward, looked me behind me, saw nothing, kept going and then heard another noise. When I looked in my rearview mirror that time I saw the sad little gas hose sitting on the ground: Detached from my car ... and the pump. I was mortified. I looked around and no one had noticed. So I folded it up nicely, placed it beside the pump and scuttled back into my car. Unfortunately, apparently everyone in the shop had noticed my idiocy take place because before I could take off again the station attendant came out, picked up the hose, sighed and went about however it is they fix it. (I don't have proof this happened because I was too embarrassed to do anything but high tail it out of there.) I apologized to the sighing man who told me it happens all the time - but that didn't really serve to make me feel any less dumb.


Ruining gas pumps aside, the Tetons were beautiful, I figured out via my camera's continuous shot self timer that I am atrocious at cartwheels... 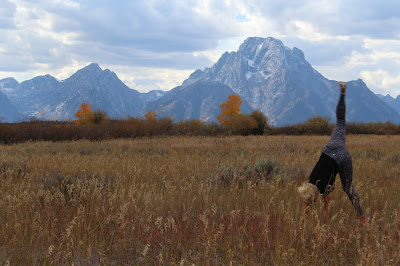 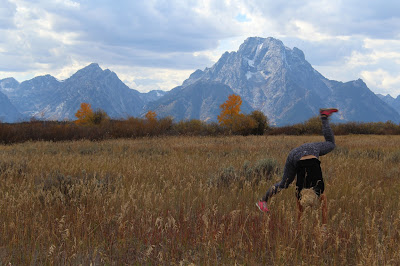 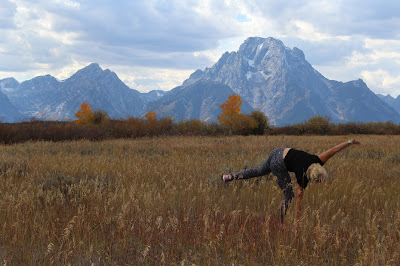 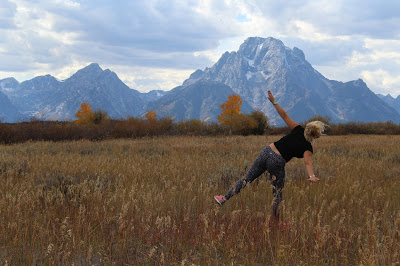 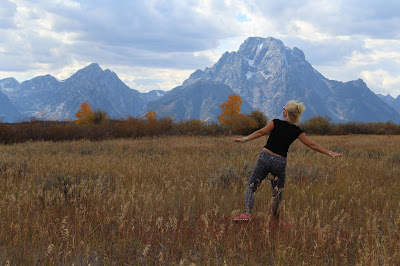 Around 6pm it was time to go back into Yellowstone to stay in the site I had reserved far earlier in the day. My neighbor was a guy named John. He looked about 25. From Michigan. Welder at Ford; on two weeks vacation in Yellowstone, et al. As soon as I arrived, I noticed his fire and asked if he had firewood to sell (I didn't have $8 to spend at a station). To answer a burning (heh) question I have been having, firewood is free too take roadside out of the park to burn. And so I my made my first bonafide campfire (like ever; I've never built my own fire before) and cooked the rest of my leftover spaghetti over it. I was very proud of my tinder firestarter skills and whatnot - John, who cheated with lighter fluid, came over and said my fire wouldn't take. He was wrong. And I proudly pointed that out. Unfortunately, despite the fire triumph and experiencing such a magnificent (and enormous!) park, I still felt in a bit of a funk. John being less than camp-friendly and not a big talker and the nights turning quite cold (~30•) made the evening that much more difficult, though I'm quite pleased to have finally had a campfire - my first all by myself andn from wood I collected and chopped with John's axe from the hill behind my site. Go me. 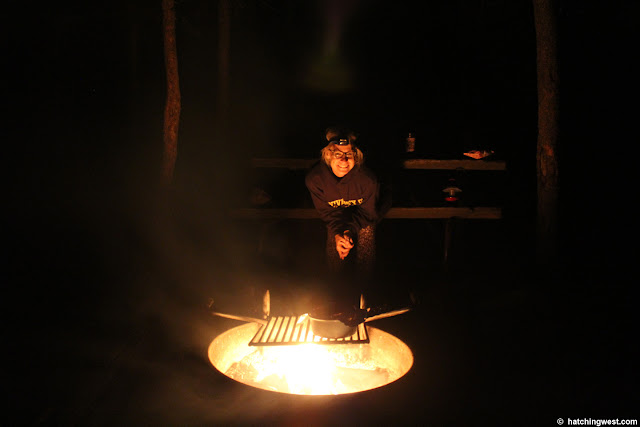 When I awoke the skies are grey and spitting. After another baby wipe bath (this site didn't even offer running water with which to wash my face) in 45 degree weather, I lost my keys and, after 20 frustrating minutes of looking for them, I found them and was off to the nearest ranger station to ask if my credit card had been turned in. It hadn't. But I took my time there to ask about the annual national park pass for $80 John had told me about this morning.

So far I have paid $65 total to get into Badlands, Teddy Roosevelt, and Yellowstone parks - an annual pass was $80. I had happened to find my $20 TR Park receipt that morning, but had thrown out my Badlands receipt the prior morning while looking for my credit card. I wanted to know if i could trade in the receipts I had, pay the extra $30 and get the annual pass. They said yes, but I had to head to a gate. The closest gate was the south gate and I had been back and forth their too many times to see that again, so I made a plan to hit the northeast gate before five to make my trade. I was so frustrated with the camp fees, my lost card, the gas pump incident, and now the annual pass business (not only had I been told about it before I looked and apparently looked up the wrong pass, which was too expensive, I, unlike John, was not told or offered the pass by a ranger at a pay station - harumph), that I was absolutely making this pass happen. Although I found it hard to get past the idea that I basically threw away $15 with the Badlands receipt 24 hours prior.

The trip was getting to me. Maybe these things all seem small, but they're starting to add up.

The sun managed its way out of the clouds in the afternoon and it proved to be a beautiful day while I managed to get through the other 70% of the park I had missed on day one.. I missed about 5% of the park by the time I left, which is impressive considering the size of the land and only going from the west gate to the south on day one. However, I felt at times, as if I was going through the motions - tourist motions; is that a thing? But I just kept going, sightseeing; geysers, mud volcanos, springs. I knew I would be pissed at myself if I let a poor attitude get to me and miss something amazing. I made my way to the park's north gate around 3p to trade in my receipts for an annual pass. The plus of feeling down was that I was particularly time consumed with the out of the car viewing, photo-taking part and was able to see far more that day than I had anticipated, so I made it to the north gate for my trade in vs. ducking out at the northeast. They only let me trade in my Teddy Roosevelt receipt (since it was day 8 and they're valid for 7 days) because the day before had been a free park day (I forget why) so that upped my mood a bit. Afterward, I drove 16 winding miles back into the park. It really was beginning to feel as though I was just driving in really, really big switchback circles trying to fix all of the things going awry.

After a disappointing view of the now nearly dry Mammoth Hot Springs and a chat with a Connecticut woman named Teresa on the mile walk back from the spring (I told her not to bother the climb with), I cooked spaghetti next to my parking space in the only part of the park that appeared to be developed (I wonder if this would be acceptable anywhere else?), ate and headed east out of Yellowstone. The road was far longer than anticipated; perhaps I was feeling better because the map got long again. I kept thinking I was further than I was so I stopped to take photos of elk, bison, (in fact, I stepped in a huge pile of buffalo shit on my way to sneak up a hill to snap a few photos of a large elk - there's a sentence I never thought I'd say -  earlier in the day I watched a buffalo bathe in Yellowstone River) a petrified tree (where I really lost my cool, having lost my glasses and taking 20 minutes to find them) and even me in front of a lovely landscape (see below for pics). I was feeling a bit better (minus cursing my glasses incredibly) until I realized how far out of the park I wasn't. It was 6:30p and the sun was setting. By the time I finally got out of the park, the moon was out and I had two hours until I got to my night destination of Cody. (All national forest park campsites outside of Yellowstone had just closed for the season.) 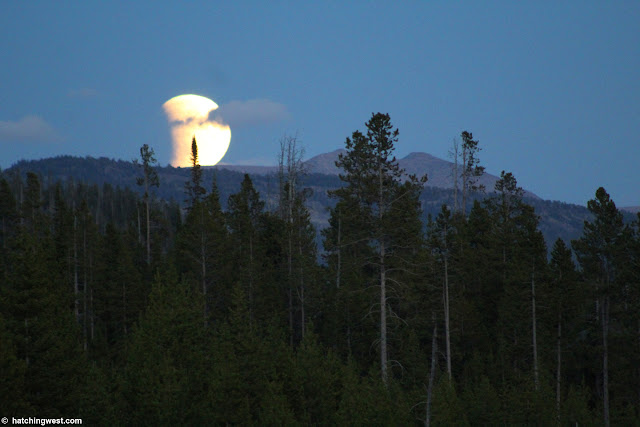 On the one hand, this was a beautiful moon. The supermoon with the eclipse. Something I forgot about and it only occurred to me once I began to see it disappear real-time as I drove through the mountains of Wyoming on my way to Cody. That was nice, but what wasn't was driving switchbacks for two hours in the dark (and darker as the moon's light disappeared) in an unknown land with few other cars on the pitch black road after my car made a very concerning noise. At 9p, when I got to Cody, I was not feeling well (and really flustered from the dark drive). A sore throat that had been bothering me on and off for days felt like it was taking over my body. I couldn't find the campsite I wanted. And the only site I could find was $30 and not well reviewed. 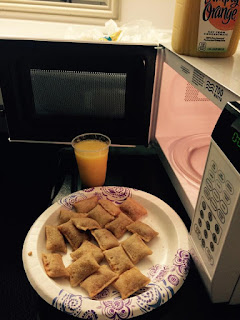 I felt like I was cheating when I went on Expedia and looked up hotel prices. But I found one for $65. It had a bed. And despite Cody being far warmer than Yellowstone, I really wanted to not sleep in a hat and gloves tonight. I considered my theory of (half) marathon training: If you take this one night to re-coop, you won't have to give up your training for two weeks to recover. I didn't have any time here to waste being sick, so I bought the room. I went to Wal-Mart, stocked up on Airborne (because I have a feeling my time in Nashville is going to bring me illness being round three babes and that won't work with my schedule), and Totinos pizza rolls for dinner. Because I'm fancy.

But seriously, after three weeks of camping, two baby wipe baths, six nights of sleeping in layers and hats, and showering with shoes on, this cheap motel room feels like a dream. I have a room WITH. A. KEY. I'm in the lap of luxury for $69.27. And I'm really hoping this turns my mood around. 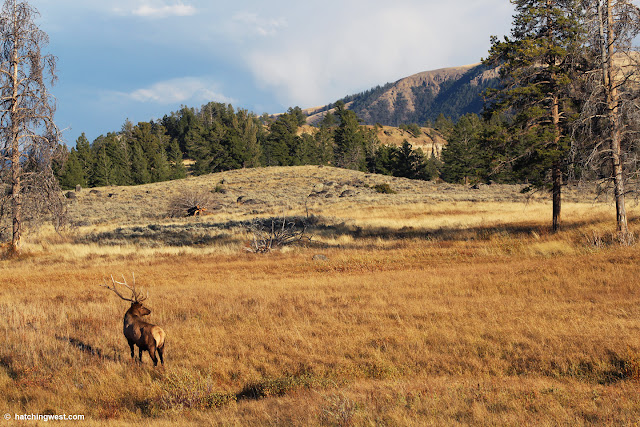 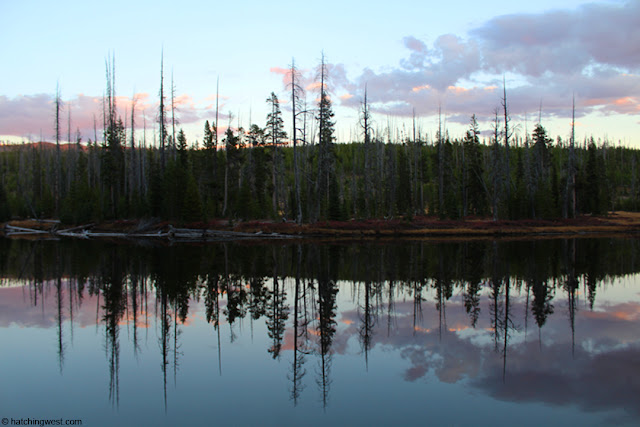 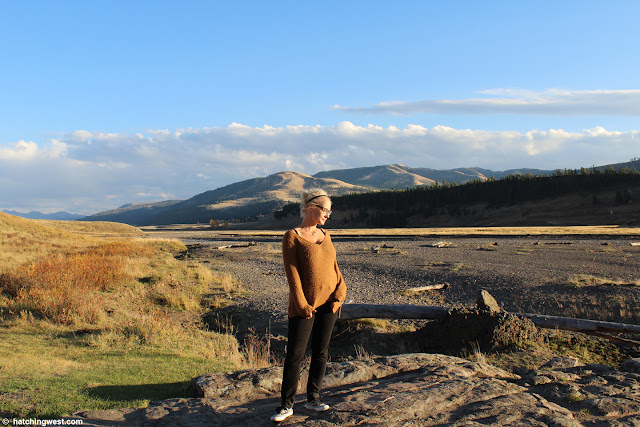