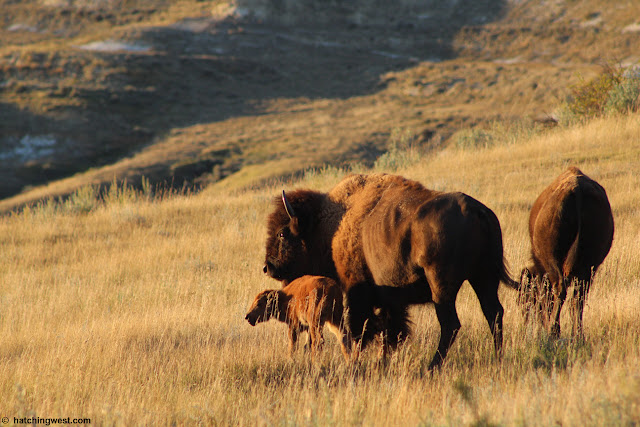 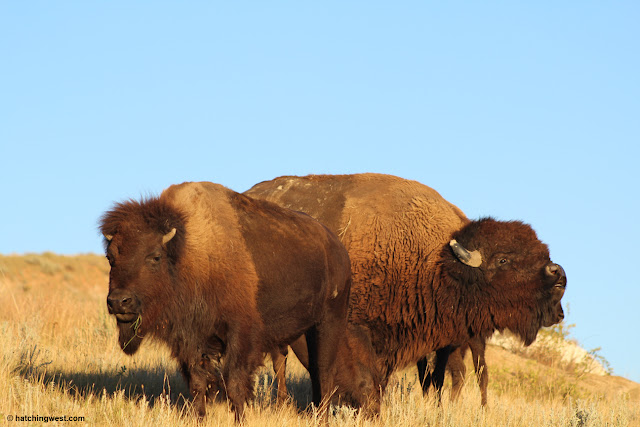 I started my day with a nice breakfast: Three eggs and toast with a Yoo-Hoo. The mom part of the mom and pop campsite came to ask how I slept in my tent: "fine, why?' I responded. And then I realized she was the owner and just being nice. I'm apparently still not used to that. She asked where I was off to and I told her that I quit my job to travel the country for some months. The guy in the conversion van must have overheard, because once I was packing up to leave, he chimed in to ask me how I liked this lifestyle.

"I thought I would miss working," I began, "but I don't." He chuckled and said he understood. That he just went back to work for 12 weeks doing electrical work down the road at a new wind farm after 16 months off. His name was Ron; fifty something, I'm guessing. He loves Jesus. And often takes whitewater trips in an inflatable kayak - once 135 miles alone. He one day wants to do the whole Missouri.

We talked for about two hours and he offered me something - anything. I took advantage of the map of the US he had that I had been searching for for weeks: A surprisingly difficult thing to locate. I did find one in Hill City (where the coffee shop I posted from the other day was, but it was from 1979). I suppose I shouldn't be surprised though, as I had been looking for a grocery store for about four days and had yet to really find one. (I don't know where people in the Dakotas get their food from.) He offered me more when, after 90  minutes of conversation about life and where I should go to next, we were saying our goodbyes: "Bourbon, weed, books, food...can I buy you lunch?" I declined and then he asked if he could pay for my next night of camping, "I really want to help you out on your way."

About an hour and 20 minutes later, I arrived just south of the Teddy Roosevelt National Park. By now I was behind schedule (due to the lengthy morning chat) and I wasn't feeling well. Perhaps it was the eggs that weren't warm cold warm cold warm cold in my cooler attached to the 12V supply that only works when the car is on for the past three weeks. Maybe not. Either way, I was dealing with a dicky belly. Look, life on the road isn't all push button showers and eating that other half of the DQ burger you got while lost in Mobridge for breakfast after finding it on the driver's seat in the morning and other glamorous things...

I passed by Painted Canyon before turning around to see it. There were some buffalo on the grass: My first siting. I hung around there for a while chugging Pepto Bismol, visiting the lav, and wondering what in the hell North Dakota has against ginger ale. (I searched multiple times for it and no gas station carried it.) Feeling mildly better, I headed to the entrance to the park and was floored when it was $20 to get in. I tried to budget well when planning this trip, but it didn't even occur to me that I would have to pay to enter all the parks - and $20 to boot! The cheeky ranger at the station told me to blame DC; clearly she saw my plate. She handed me a park paper and told me to think about it.

I drove out and thought about the $20 Ron had handed me that morning. It seemed as though the universe was at work. I decided to use that money to enter and camp within the park since it was only $14; hike some trails tomorrow since I was feeling ill and weak today. Now, having seen it, I don't know why the park isn't more widely known because it was truly amazing. Suddenly, I'm healed. (Really though, like night and day.) 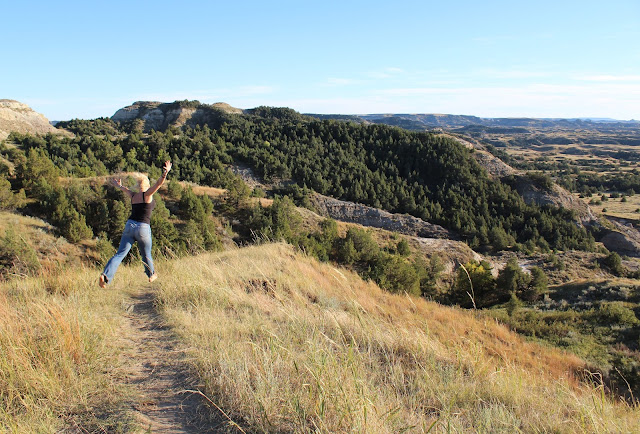 I'm really glad that Bill mentioned it (or was it at the random couple from Indy at the World's Largest Buffalo?) My favorite part was when my car got surrounded by bison - which resulted in some nice photos (see top). I am, however, still kicking myself for not nabbing a video of the whole ordeal. It was nerve-wracking a bit - I thought they would gore my car a couple of times, but I just stayed still and kept the Gershwin playing. (I swear the Rhapsody in Blue is why they kept coming nearer and nearer...that or the idiot behind me that kept walking up to them.) 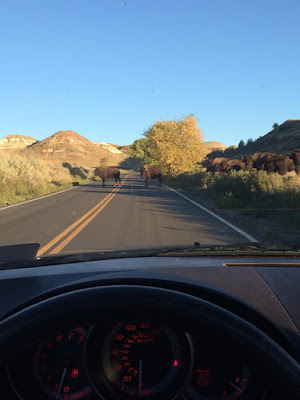 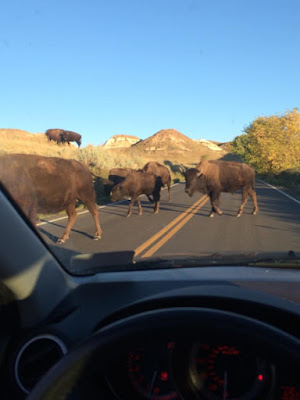 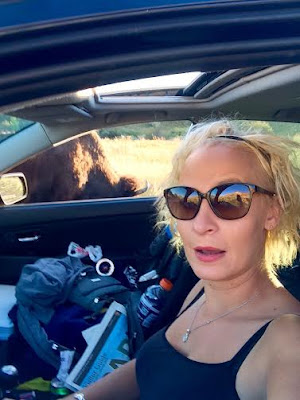 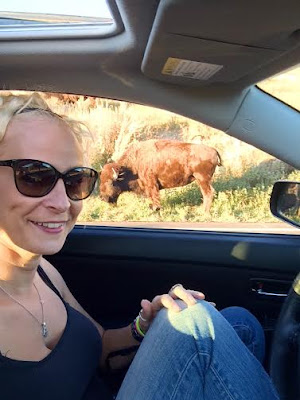 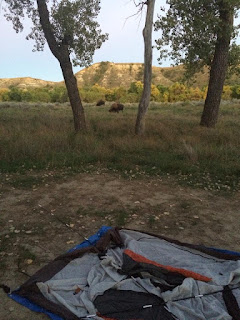 I also encountered lots of prairie dogs, a coyote with beautiful amber eyes at the golden hour, wild horses, and some (what I think were) white tailed deer. Plus the amazing terrain of the park over a short 36 miles. I look forward to a couple of hikes tomorrow.

But first, when I arrived at Cottonwood campsite tonight, there were two more bison about 20 yards out from where I set up my tent. One even walked up to the woman beside me's picnic table and waited for a treat. Although when I went to put my camp deposit in the box, they had migrated there and gained a friend who didn't like my presence so hot to trot back into my car after popping $14 in the box.

Side note: While running out of food night, I made a really stellar meal out of what little I have left: A Knorr rive pack (chicken pilaf) with canned peas and boiled carrots plus a can of tuna. Quit tasty and filling - and as glamorous as this life is, I'll probably eat the other half for breakfast. 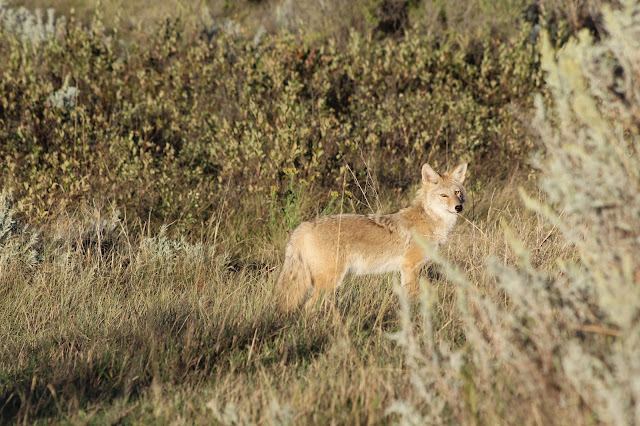 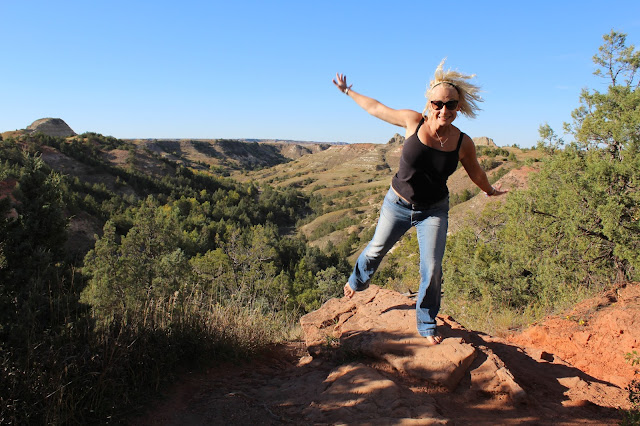 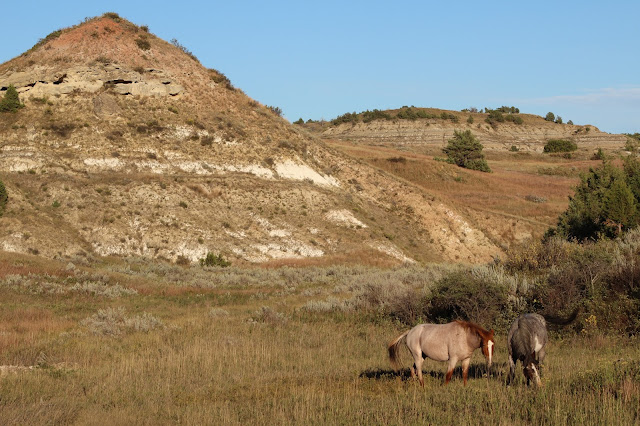 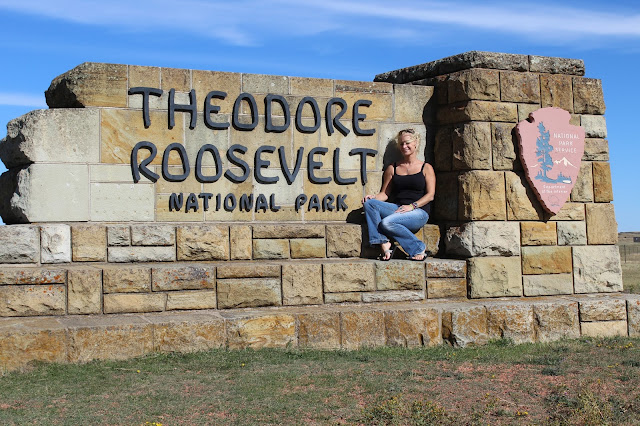