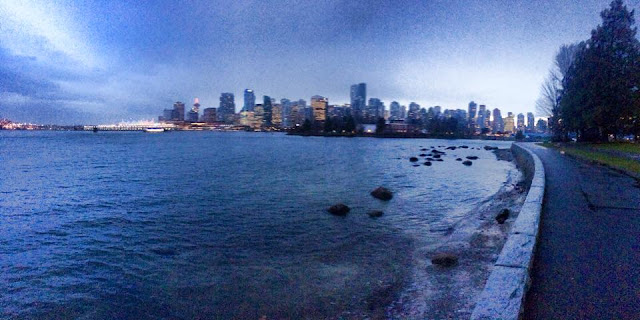 Yesterday I woke up, puffy-eyed and still a bit overwhelmed by the prior day's events. I decided to try to make the best of being in Vancouver, even though it was raining. I drove for a while, then ended up in Stanley Park, the only place my arresting officer had to suggest. In there, I found an aquarium. Zoos and fishes, my go to when I'm having a bad time. (See also: Pete's Dragon.)

The $31 price tag was steep, but mitigated by that fact that I had just discovered that Canada has a 75% exchange rate. This also meant that my angels gifted me. Briefly, I considered donating the excess, but while discussing it with a girlfriend, that seemed rude. And also futile. I am in the midst of financial struggle, running out of my original funds and having just taken out a 'loan' that has yet to be approved/processed, which I really don't want to use but eases the tension of "oh fuck, what if's."
It seemed worthwhile, then, to use the money that was so graciously donated to me to recover from the whole ordeal, which included the aquarium. And also a hotel for the night, which I booked closer to the city. (Although this hotel ended up not really being near the city and more of the outskirt, bar on the windows parts that no one wants to go to.)

At the aquarium, I met a kid named Mat by the jellyfish when I was trying to feign a smile for a selfie. I spent cumulative hours staring at different tanks of jellyfish, trying to get my shit together; I found them oddly calming. He offered to take it for me and then we introduced ourselves and began to talk; both east coasters (though he's Canadian) and both traveling solo. I told Mat about my previous day's perils and he told me about his struggles with addiction and his new-found sobriety.

Someone on Facebook - who apparently has decided that certain elements of being terrified are nullified by location - said, "but it's Canada." It doesn't matter where you are, nothing punches you in the face about how very alone you are, quite like nearly getting arrested in a country that isn't yours and has little concern for yours rights or comfort. And then from there, becoming totally disconnected.

On the one hand, I am proud of myself for pulling it together enough in that Starbucks to make my phone functional, contacting my friend and asking for help, posting on Facebook that I needed a virtual hug; in short, admitting temporary defeat. It was only when I admitted I needed help, that I could see how much support sat behind me, no matter how far in life or distance or circumstance. But, that didn't make up for being solitary. I was still alone, I was still shaken; I want my home, my mother, my friends, but I also want to continue this journey and I spent the day talking with Mat about our challenges - though very different, also extremely similar in a sense - and that helped. Asking for help is everything. Together we met beluga whales and dolphins (and went to a beluga whale show together, learning beluga whales are actually dolphins, not whales), seals, otters (a favorite of mine), lots of other fish, and exchanged Facebook info before parting ways. 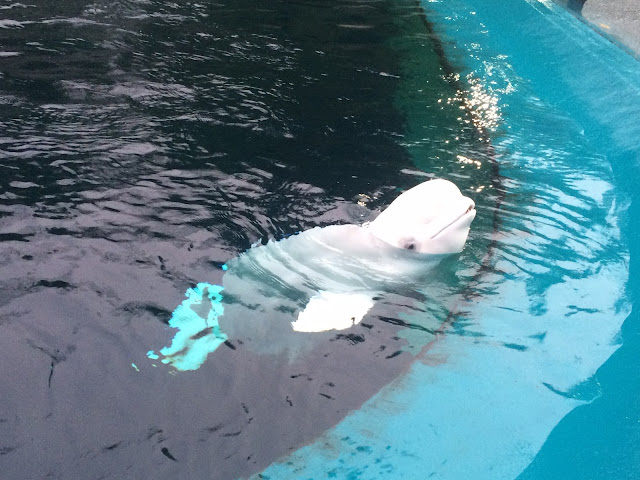 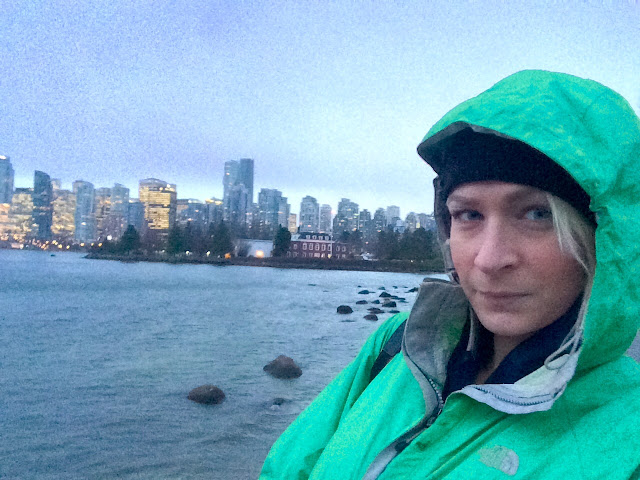 From there, and still raining, I went around the park. In the grey of a dulling day, it seemed as though the city was Gotham: Dark and gray and uninviting. Such a stark difference from the beauty that was sold to me before I arrived. I drove around and park and ended up at Prospect Point, which I would later learn was a popular tourist destination, as the sun settled into night. 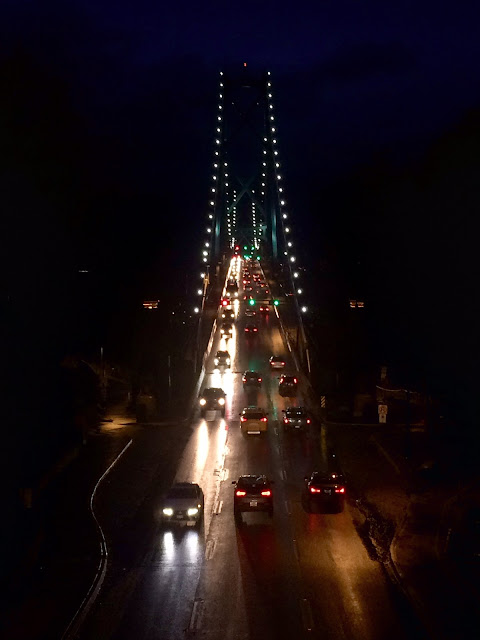 Still, raining and by then it was getting cold; my feet wet, so I decided to find my hotel. The only restaurant within walking distance - that wasn't Chinese food or noodles - was directly across the street. When I landed, I met a fellow east(ish) coaster named Peter, a systems engineer, who lives in Chicago. We chatted and I had poutine and a salad for dinner. Healthy, I know. But it was cheap and what's a trip to Canada without poutine? (Even though it was vegetarian poutine.) Peter and I chatted, walked back to our hotel and parted ways. (I think he thought I was hitting on him; I wasn't.) 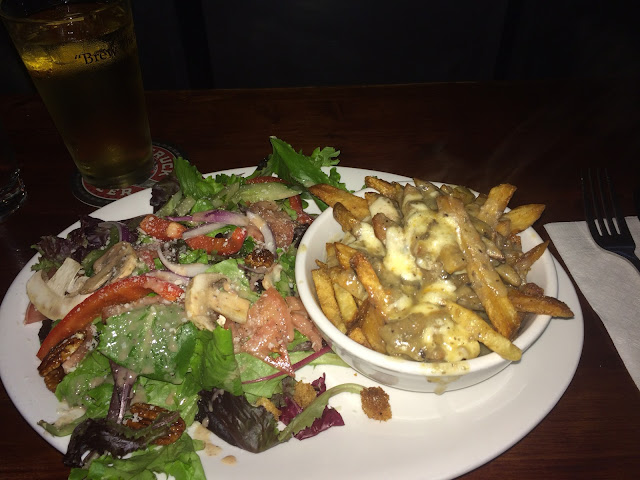 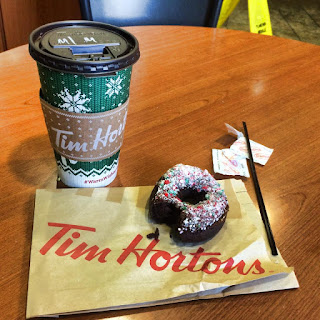 This morning I headed into the downtown. Being that my hotel I had purposefully booked myself in the city wasn't really, I had to pay for parking - which turned out to be $18.75 for 3 hours! G'damn Canada. I walked around the downtown, including the harbor area, grabbed my pin (since the aquarium was out of them for the year... really, guys?, I had to settle for a generalized Vancouver pin) and had a douughnut and coffee at Tim Horton's, which seemed like a Canadian staple enough to have to indulge. Also, $3.75 is within my vaga-budget for meals and I was looking for free wifi to use while I wasted some time before my 'date' in the evening at 7pm.

I got back to my car and drove out of Canada, not too upset that I was leaving. Actually, I was kind of relieved. I felt I had done myself a duty and escaped unscathed in the grand scheme of things, thanks to a very nice group of people online. No lasting, damage, I thought.

Going back through customs into the US, I was dreading the process. I didn't know what to expect, having been so incredibly inappropriately caviler on the way in. As I waited in line, my anxiety grew. Maybe they were going to take my flip knife, the only protection I had left. (Although I did order a new stun gun with the conversion money and had it shipped to my friend's house in Carnation - which meant I was stopping back in Carnation on my way down to Las Vegas.) Protection that, this morning, I realized was totally warranted, as a report came on the news as I got ready that said that a woman was raped in the park I was in the night before. What if that had been me and Canada had left me defenseless? No cool, Canada, not cool.

My anxiety, however, about going through US customs was completely unwarranted, however. I pulled up and the officier was friendly, said hello and asked what I was doing. Since it was imperatie before and he hadn't bothered, I asked if he needed my back window down to which he sort of said yes, barely looked at the piles of stuff in the back and then asked, what seemed most important to them: Do you have any citrus fruit?

"No," I said awaiting the next string of questioning.

"Okay, have a nice day," he said handing back my Passport. I paused, unsure if he forgot to ask me more questions. With such a terrible time getting into the country, I was expecting more trying to get out, but no question about drugs or weapons or... anything, really. I laughed on my way out, half relieved and half amused. Because that's what American cares about: Invasive fruit bugs.

I drove a few miles and stopped off at the same rest stop I'd slept at before the Canada fiasco to waste a bit of time and spruce myself up a bit. On my way back into my car I noticed something: My car had been keyed on the driver's side door... aggressively. It must have happened when I paid $20 to park it in the damn garage. For a moment, I was angry, but then I figured if that's the worst that's come out of this whole ordeal, then that's okay - it will be fine; it's just some paint, I calmed myself. And then I got in my car and drove even further away from Canada. 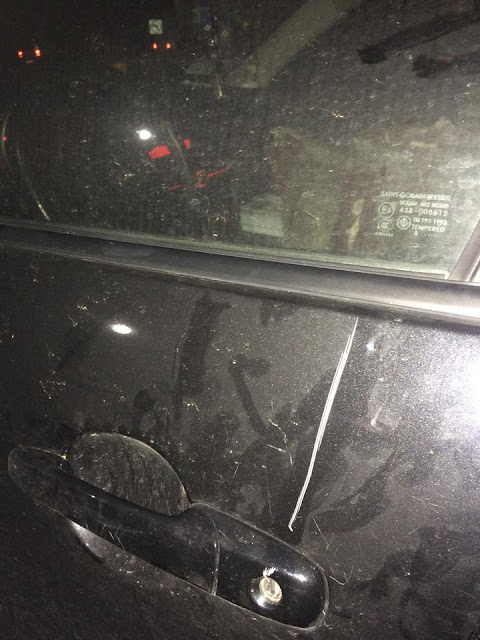 Posted by Hatching West at 7:43 PM