While I tried to make the best of Vancouver, I was still pretty happy to get out of Canada and back into the States - plus I had my date with my friend Nathan's Antarctica friend, Zach. Plus, he was taking me to a comedy club, which, surprisingly, was a first for me. 32 years and 16,000 miles around the country, but still hadn't been to a comedy club - go figure.

I met up with Zach, who was undoubtedly a incredibly guy - as I would expect most people Nathan befriends. (Although J is his friend too...so maybe not.) We had a few drinks and I told him all bout my Canadian exploits and my latest discovery: that Canada not only left me traumatized, but it left me a reminder of how shitty it was every time I open my driver's side door. We played darts (I beat him at a game, by the way, and he plays all the time. toot toot.) for a couple of hours and on the way out, he asked to see my keying before we went to the comedy club. When I showed him, he told me there was something stuck in there. "Great!" I said, "now I can't use the only keyhole on my entire car if the keyless entry dies." (Sweet design feature there, Mazda.)

"I can fix it," he said confidently.

"Okay," I replied, skeptical, yet hopeful and we went to the comedy club. It ended up being an improve group which Zach admitted was the most awful one he had ever seen there. And around midnight we headed back to his place. He got a pair of pliers and pulled what was stuck in my keyhole out: it was the tip of a pair of scissors. At first I was delighted and then I tried to use the key. 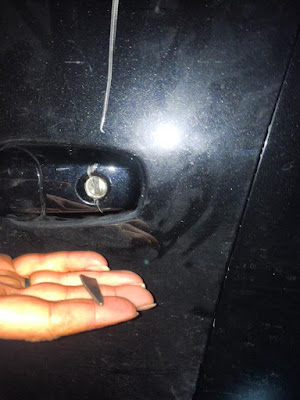 Unfortunately, the key now no longer worked because when the person pushed so hard to break in my car with a fucking pair of scissors (on what meth-fueled planet would that ever work?!), it damaged the lock mechanism before it broke off and ricocheted up the side of my door, damaging the paint.

It occurred to me shortly after, that it was the woman I saw walking up the ramp when I was walking away from my car - who I smiled out and she didn't smile back - who was the likely culprit. In addition to the fact that she didn't smile back (which was an a strange enough exchange to dig into my memory), she was walking up the ramp instead of using the stairwell (which you needed to use your paid parking ticket to access). Plus, she had a large purse. And could easily pass as a drug addict - or just an asshole. She also watched me leave, looking nearly fancy in my magic coat. (Turns out, internationally, not so magical.) I was fairly upset about this latest discovery, considering that were I in the middle of nowhere with no service and my keyless battery died, I was screwed as to how to get into my car. He assured me that he could fix it in the morning, I relented, and we went inside his 'house' for the night.

I use 'house' loosely, as Zach happens to live in his friend's garage he converted into a bedroom and had been there since he'd returned from Antarctica. (He has an 11 year old daughter who lives in the main house.) There seems to be a trend forming now, where, like with Danny in Utah - like attracts like in a nomadic kind of life. In the morning, I met his daughter; we all went for coffee and breakfast. 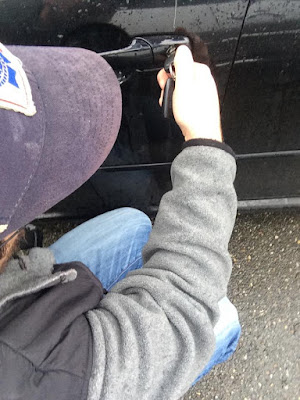 When we got back, Zach made good on his promise, pulled out his lock pick kit (who the hell has one of those?!) and, after about 30 minutes or random fudging, somehow restored my keyhole to functional! Ugly, but functional. Again, my life returned to the 'normal' it was before everything began to fall apart; the minxy little universe appears to be flexing it's muscle to show me that it's entirely in power. So many things went to shit on this portion of my adventure and everything ended up just fine - the only lasting damage (aside from an avoidance of Canadian customs) is a scratch on my car door.

It's kind of unbelievable when I think about it...all of that went wrong and here I am, back to 'normal.' I'm incredibly grateful. And, undoubtedly, far more humble.

After I left Zach's, I spent the day in "downtown" Bellingham, poking around. It was a quaint nice, adorable little town I would totally consider living in. As the sun began to set, I made my way back to Carnation because 1. My replacement stun gun is being delivered there and 2. I am still rattled by the previous 4 days' events and so I'm going to go back to the last place I was comfortable in order to try and regain my composure before taking off solo again. So, back to Seattle... an unplanned reunion.
Posted by Hatching West at 9:54 PM