Day 50: Suffocating in your Exhale 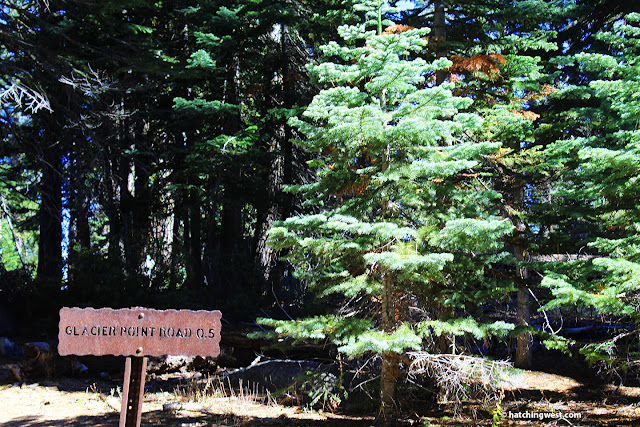 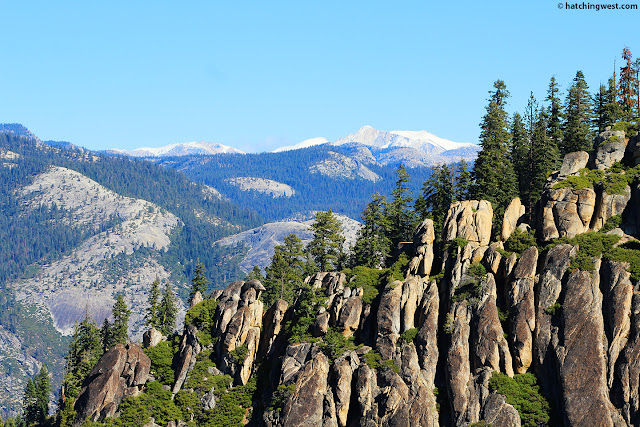 Oct 17: "Are you going to to be OK," she asked in the parking garage as I was about to leave.

"We'll see" I responded, hiding a quiver in my voice. I'd been staying with Lisa for a week. And it took until 5pm for me to actually work up to leave today. Every time I stay with somebody doesn't get any easier to leave. I'm on adventure, but the comforts of (a) home never stop being comfortable in the kind words and embrace of people that I now know is always a necessity. It's been this sort of kindness that has blessed my journey with ease.

Oct. 21: I arrived in Yosemite to some kind of reality check. With 5 days alone after Austin I, again, got used to the beat of my own drum. I enjoy the stops and couches to surf and the hospitality and friendly familiarity of faces from my past, but meeting someone in park turned out to be much different. There was a fleeting warm welcome from a familiar face - we'll call him J - before it took approximately 41 hours for us to step on one another's toes.

Here's something I might regret being open about, but if you want me to get steamed fast, top 3 topics include: 1. Money, 2. Uninvited relationship "advice" and 3. My intelligence - although that one isn't as much as a subject as it used to be. Ironically quitting my job taught me just how much I know - which turns out to be a lot. Also, in recent years I've become very comfortable w the fact that, in the grand scheme of things, I know nothing. So perhaps three is off the list, but can be replaced w people who talk about their jobs ad naseum. You are so much more interesting than your means of making money, world. Which leaves money and partnerships, which my latest companion decided were the things to talk about on our hike today. First, that I need a partner; "traveling with someone is so much better than traveling alone ... and it's cheaper." Which then moved on to full blown (terrible) financial advice, which, at first, I tried to entertain to be polite.

To be fair, we talked it out afterward and he was excited about a thought he had which came off as aggressively touting his personal views to push onto me after multiple instances of "you need to..." - which he also later explained was his way of suggesting something. Seems odd to use need as an ought and you as a general, but anyway. He is a friend of a friend, I suppose those kinds of things get twisted when you don't ease into sharing the back of an SUV as a bed.

But 41 hours? Really? That's it? Am I that short tempered? Or annoying - as the fallout exchange would suggest? I try to be as considerate as possible. Okay, I can take a while to get ready, that's fair, but I'm in no rush - and I didn't know he was. And my femininity decided to check in again yesterday (after just 19 days), so that I'm dealing with that while sleeping in a car and peeing in the woods, I'd say is mildly impressive - even with the extra minutes. (To suggest that my body is confused as to what the hell I'm doing, I think would be an understatement at this point.)

I begin to consider that maybe I'm alone too much now. Too used to being by myself and now I can't properly function with other people. But that doesn't sound like me at all.

At the moment, he's falling asleep next to me in his sleeping bag, I atop mine. We are on the side of the road, just outside the gates. I can hear the Merced River - in which I washed my hair this morning and learned you can get a massive 'brain freeze' from pouring cold water on your head - to the left, just below us. 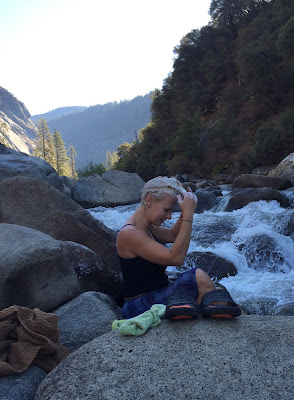 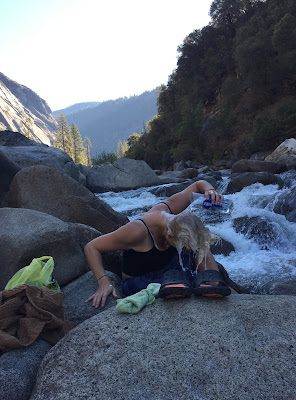 And yet, instead of enjoying this kind of serene moment of dark and all quiet but the running of a river, I'm mulling over snafus in personal relationships. Is it always that they follow us like this? Do personal interactions supersede even the most amazing of places and moments in time? I don't like it.

I try often not to get in the way. To keep everyone happy; environments and relationships copacetic. Bite my tongue and honestly say "whatever you want to do," but we all have buttons and reach a tipping point. And as much as I wanted to bite my tongue at the peak of that beautiful place, I snapped for a moment: "but I don't have money!" What a fucked up conversation to have in one of the most awe inspiring parks in the world...and with someone currently unemployed and living out of her car. (I mean, voluntarily, but still.) 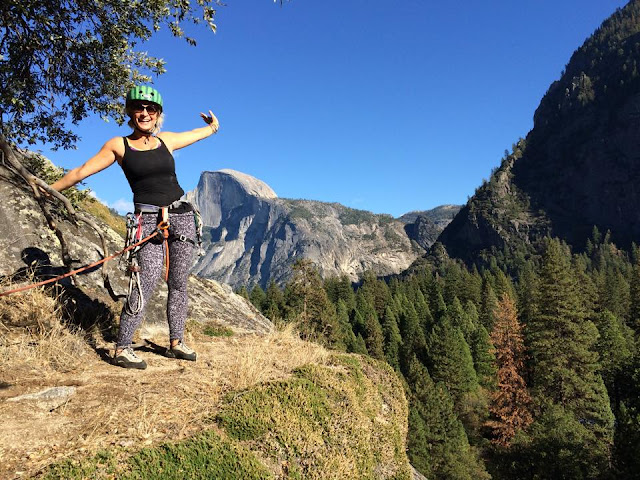 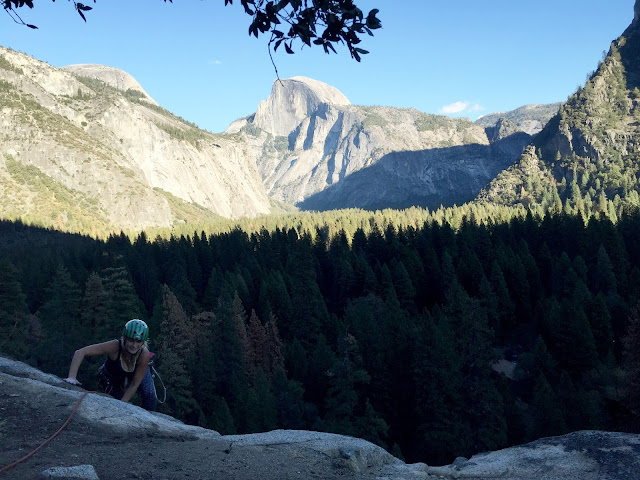 I climbed yesterday. J lead trad with his gear. And I picked up the cams along the way on my first multi-pitch. After 3 pitches and climbing 300 feet of rock, I felt pretty good. And he was so kind and gracious and proud, I think - telling me how well I did.  And I appreciated it. I made a nice dinner - as nice as you can cooking out if a car - as a thank you. During, he went on about his job. One of the very reasons I left DC: everyone there defines themselves by their means of income. I asked him if perhaps he could choose a new topic - I guess he didn't like that, I found out in the fallout. Regardless, it was a good 40 hours and yet, the negative moment in a 30 minute conversation, that will likely never matter, is the item weighing in. The nagging little gnat. And it kind of just makes me want to leave (which I nearly did today) just to get away from a situation that feels uncomfortable; unwelcome; tethered to someone else's words, wants, dislikes, etc. None of these feelings exist in solitude.

But then, I think, if I leave, the stupid nothingness wins (and I'm completely alone for six weeks. My moms flying to Cali for a few days in December), plus I'm out free 'lodging', so I stayed - for now. I hope it gets better and the pink elephant waddles away for a swim or something. I don't really need any more elephants. I'm not sure if I'm a good pack animal anymore. 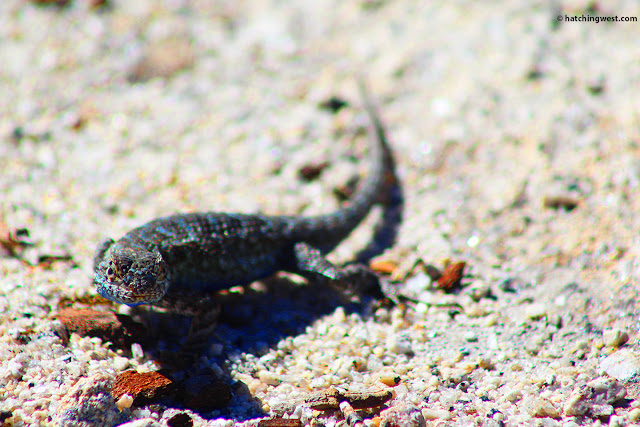 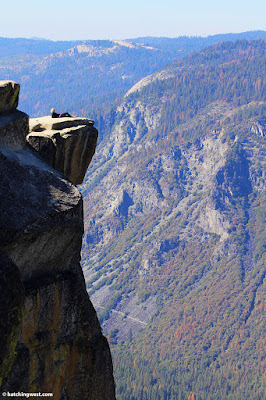 Oct 22: The day following the fall out: I got up early to be out of his car so he could be on the schedule J wanted: 7am and I was kicked out of his car and into mine. I took the morning to myself; him to himself; I took a gas station 'shower' in the sink, blogged a bit, mapped my route so far, did some work on a potential freelance job - and in the best office possible: Sentinal Meadow, overlooking half dome. We met up again at noon and hung out; he did some bouldering and I just laid back. We had a lovely chat with a New Zealand couple and their son, Rocco, wrapping up their six month trek of the US. (Now I'm envious. They got sick of the 9 to 5 too and decided to travel the US.)

There's clearly still an elephant swinging about in this situation, but I'm hoping it will wear off. I think we're both making an effort not to In the car tonight, nestled in our bags, he said he was going to crack the windows - as I requested the first night based on, you know, oxygen and C02 - "so, you don't..."

"Suffocate in your exhale," I finished his thought.

"That would be a great title for the blog I wrote last night," I said, then admitting I'd written about our whole clash. He seemed displeased, but, honestly, I don't think confrontation is a bad thing so long as you get over it. Any friendship that means something has to overcome challenges here and there. Here's hoping. 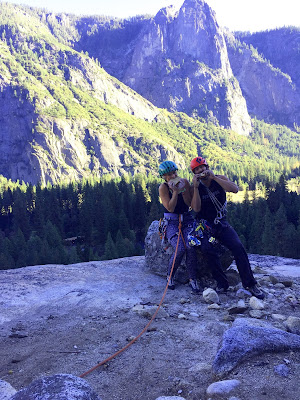 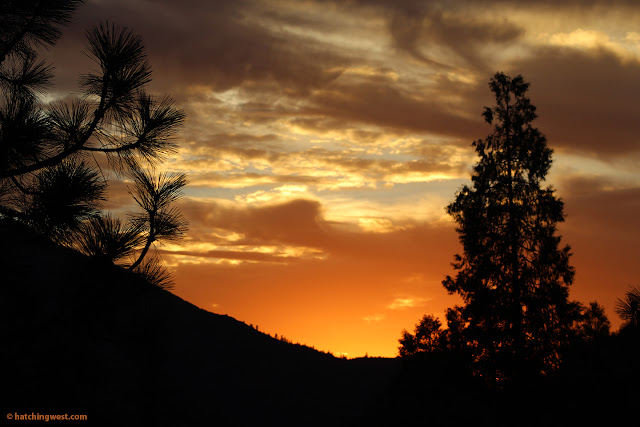 Posted by Hatching West at 7:44 PM