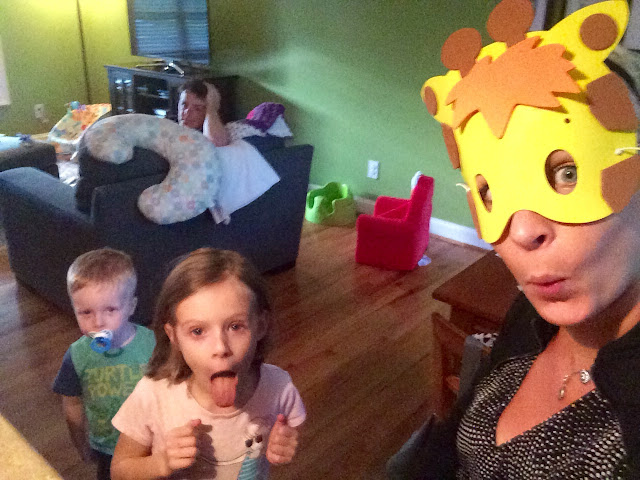 I arrived to my sister's on Friday night around 9pm; it was an 8 hour drive (550 miles). I'm leaving tomorrow morning, which means that I have been in the same place for four full days. This is the longest I've been anywhere since I stopped in at my other sister's in Indianapolis at the very start of this thing. We've done almost nothing while I've been here, which was a welcomed change to recharge, and some serious quality time with family. Although we did venture out for tacos at a local place that boss on Sunday and BBQ tonight. Otherwise its been her two eldest kids being and/or getting sick and me trying hard not to get sick - which meant chugging a lot of Airborne that I brought with be because I had a very distinct, gut feeling from the start I was going to get sick while there (my sister's kids have a knack for effectively sharing their germs with me) and that wasn't going to mesh well with my scheduled plans after Nashville. It also included me accidentally teaching my six year old niece how to properly poop in the woods (she found my poop trowel when I was reorganzing my car and asked what it was), which in turn meant she taught her dad how to properly poop in the woods: "You dig a hole, poop in the hole, and then cover up your poop with dirt."

"That's right," he replied as he arrived home from work, now half confused, half proud, I guarantee she's the only kid in her kindergarten class who knows how to correctly defecate in nature. Go Auntie?

After two days of doing nothing - aside from fighting germs - I was starting to get the itch to leave again, which I found both surprising and comforting. Like, okay, I was having a rough time, but all I needed to do was chill out for a bit and hit the restart button. On this portion, I learned that when vagabonding, even nomads needs to set up shop for a little bit sometimes when life on the road begins to feel overwhelming - after recharging, you're good to go again.

Now, being that it's my birthday tomorrow and my family loves me. My sister was awesome and asked what I wanted for a birthday dinner last night: Grilled chicken salad. So she made that and my brother in law picked up an ice cream cake from Dairy Queen - yum! (Thanks family!) In loo of candles, which where lost in oversight, I suggested we light a french fry left over from dinner. Then my niece helped me blow out the 'candle' and I had my fill of ice cream cake all day today too.

While I was re-marking my travel log map in Colorado (because the Dollar General highlighter I had previously used turned out to be (what I'm assuming was accidentally) disappearing ink)), I noticed that New Orleans is exactly halfway between Nashville, and my next destination of, Austin, TX for ACL. (I had purchased a weekend pass to about five months ago when this whole plan was beginning and realized that ACL would check music festival from my bucket list and count as a self birthday present, which I used as an excuse to drop $250 on it. Hey, I was still employed at the time.) So, when I realized this halfway point in Colorado, I began to think: What better place to spend your birthday than a first trip to NoLa?

So while this seemed like a good idea because it would split up the driving, I wasn't sure about it because 1. I didn't want to not see any face I didn't know on my actual birthday and 2. I didn't have money for a hotel for two nights. In fact, I didn't really have money for a hotel for one night, but I was trying to ration it out. Then I thought: What could it hurt to post to Facebook to see if anyone would be willing to put me up in NoLa for the evening of my birthday? And holy shit, they did! So I"m going to New Orlease for my birthday tomorrow morning! Wee.

So I'd better get to sleep - it's getting late and I have to get up at 6:30a with my sister and then drive for 530 miles (8 hours) and then drink and dance to turn a year older. I'm recharged, full of Airborne, BBQ, and ice cream cake and ready for the road ahead.