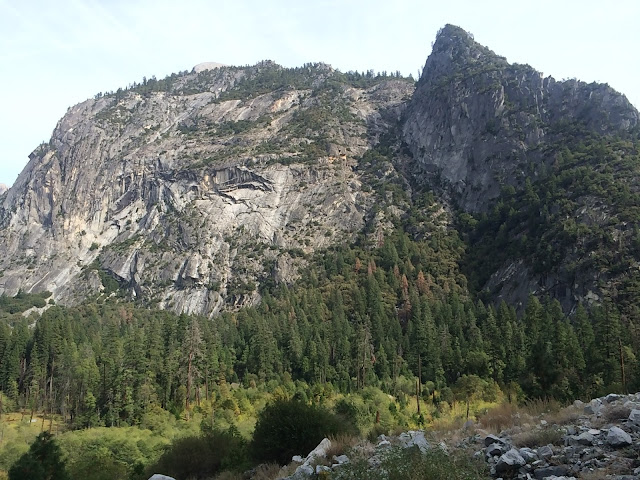 I should have known it was going to end like this when, two days ago, as the Foo Fighters came on my iPhone through his car speakers, he asked in all seriousness,  "Is this Nickelback?" 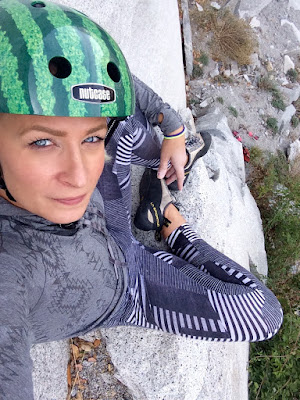 There's nothing worse than spending 7 weeks, starting out nervous and green, rising to a feeling that you can do damn near anything - and by yourself - only to have someone (who invited you, by the way) tell you that you're not good enough to do something you know damn well you can do, but you need their rope to do it. Thank you, J*, for ruining this portion of my trip. For belittling me and my confidence - like you know me better than myself. I could climb that fucking rock. Instead I'm going to free climb this one I(left) alone and hope I don't break anything...

Yay!, she types from below the rocks in the sand at the foot of her climbs. About 25 feet, two different formations, twice. Trusting the shaky formations would hold my weight the second time - for pics. If someone had asked what the worst time had been on the trip, I would have said the few days after Yellowstone. I was just ready to see people I knew (and stop losing stuff). But I realize it's much more lonely in the wrong company than it is alone - yet again. I used to think that was just relationships, but no. The worst moment is building myself up only to have one person gut punch a hole in my newly found feelings of personal pride; power.

Months ago when I posted I was going on this journey, I had half of my family and some friends tell me I couldn't or shouldn't and slowly they warmed up to it. I have since spent the past 50 days feeling more empowered by my life than ever I have before. Coming to Yosemite - because I was invited to hang out and climb - tore to pieces that self confidence. Or, perhaps more accurately, frustrates me to pieces that someone with a bit of rope can't see in me now what I feel: that I can do damn near anything I put my mind to. Including climbing rocks. When he invited me he said "come meet me in Yosemite and climb some rocks" what he should have said was "come meet me Yosemite to be my backup in case I don't find someone better than you and if I do you can just watch us do what you want to do." What a prick move. I'm actually a decent climber.

How fucking small he made me feel today, telling me that he an his brand new friend were going to climb a rock, suggesting I just be a rock bunny hanging out at the bottom; watching happen what I wanted to be doing. How powerless, all for a bit of rope. I am not comfortable with being told that I can't do something - and especially now. It lights a fire that would burn down this park. But I can't even prove to this moron that I can move mountains because he has the tool I need to move it without the threat of breaking if I fall down it. (Not all success begin w a triumph. It's that threat of falling but keeping on that defines success.) I think, then, what I need now is some rope.

And it's so odd; he used to be this cool, super chill dude. And now he's a self righteous old man touting nonsense as wisdom. Useless puff pieces of knowledge grounded in nothing and absolutes; telling people what they are (not) capable of and what they need to do, like he has any idea what he's doing. It is no one's place to tell people sure of themselves that their self confidence is baseless.

I am stronger than five mile mornings and one hundred push-ups. And I am smarter than a foolish pride in not paying student loans and credit cards and thinking everything is better with a partner. It's not...at least as a woman. Learning to trust myself enough to not fall down a rock when no one would find you: That's not better than a partner. Or any length of rope. I've gone 10,000 miles alone when many doubted me. I can do anything.

::reading rainbow theme plays in the background of my head::

Posted by Hatching West at 7:23 PM