I like to write. I write a lot. And even so I can't think of words to describe the past three days.

Supercalifragilisticexpialidocious? Something like that. Austin City Limits was awesome - beyond. I have done a lot of cool shit in the past six weeks but ACL tops the charts. (See what I did there?)
A couple of years ago I had the thought that I would like to go to a music festival - never sooner, thinking I wouldn't be able to handle the anxiety of such massive crowds. But by then I assumed I was too old. (I also once wanted to meet Dave Grohl as part of my bucketlist but didn't even both to add it because it was so far-fetched.) I really need to stop limiting my wishes and wants.

Despite being euphorically speechless, there is one thing I realized this weekend. Months ago when I bought the weekend pass, I only did so because a friend of mine said he would join me. Turns out, he was really only there for Saturday and a few hours Sunday, which meant I was alone more than I wasn't. Prior to this trip, I wouldn't have been comfortable with being alone at a concert, let alone a series of concerts, but it wasn't an issue. And looking around, it became clear to me that the majority of people at the show weren't there for a sense of community as I was anticipating; they were paired up or in groups. Me, I was alone. And I was okay with it What a difference 7,000 miles alone makes.

I tried to go to sleep and the words flooded my mind:

I said I have been alone on this journey, but that's not true. Music had been my companion. It has been my cheerleader when in down, my friend when I'm lonely, my noise in the silence. When I was in New Orleans I felt myself truly come to life again on a sidewalk outside a cafe after I checked out of my hotel and was wandering the streets, hunting for beignets and taking a look before I was off to Austin. And what brought be back was five strangers playing jazz for tips. No one else was stopped. Then I stopped and soon a crowd gathered and then we were all involved. For that moment and those notes, we were a community.

ACL was a weekend full of family I've never met and will likely never see again, sharing the lineage of our collective love of music. A love they will have you dancing in the heat of a 102 degree Texas sun. A love they will make your feet hurt and bones ache but the love outweighs your pain - you move for the music and fuck all for the pain. Pain is temporary. The memory and mood of good music is for-fucking-ever. 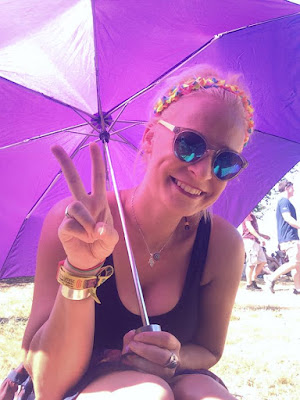 It was interesting to experience the festival both by myself on Friday and half of Sunday and with a friend Saturday and half of Sunday. It was interesting that I was surely a minority when I was alone. The human condition had us expecting that we should be with others to experience joy. To share in the love. But there is certainly something to be said about being with yourself and enjoying your new community anew - even if they are just a fleeting family.

My trip was marked by loneliness, but I have never been alone. Music had been my friend and at many points I've cultivated a new temporary friend that I never would have met or exchanged w had I not been alone. And I've built this thing within myself that has learned to be alone; to thrive alone. The melody of my truest companion breathes life into my heart. And after 3 full days of breath, I am full. I am content.

It was on this weekend that I learned that my next city has to have a heart that thrives to the beat of a drum.