The next morning, in my server's guest room, I woke up well rested. Brock and his wife left to pick up another puppy and left me alone in their house with a note that said to help myself to anything I wanted and inviting me to stay the day if I could (but if I had to go, that was okay). Unfortunately, I had a schedule I was trying to keep, so I couldn't stay. I took a nice hot shower and headed out. Brock invited me to come back any time and if I ever needed a place to crash, I could go back to his home. It was then that I realized: It those that have the least to give who are most willing to give everything that they have. I left beyond touched by Brock's kindness. His energy warm; his heart open. Humans can be so damn lovely.

I meant to go to Boise (my mom had said she heard it was beautiful), but also I wanted to see Missoula (I had heard a lot of people chirping over it). Naturally, to decide where I should go, I posted a poll question on Facebook: Boise or Missoula for the evening/morning? Missoula won, hands down. So there I was, traversing north into Montana...beautifully... (and also hysterically),

I got into Missoula around dusk, which at this point in the year means about 5:30p. I was looking forward to poking around the city for a bit, but the hotel I booked had other plans, having gotten a hotel on account of my previous free nights. I have an every-other rule in order to keep my budget and still get to shower and avoid the now-freezing temperatures at night. (So much for avoiding winter.) Since the past two nights were free, this one was definitely a hotel night.

Unfortunately, when I arrived, I was informed by the front desk kid, Tyler, that was no hot water; the heater had broken and the part they needed wouldn't be delivered until tomorrow. I was offered to go down the street to use their shower at a sister hotel. With a huff, I agreed verses getting a refund and paying $10 more for a different hotel. Then there was an issue with my card; I had booked through Expedia, who had charged my card, but the card provided by Expedia didn't go through for the hotel.

At this point, vagrants began to trickle in. First, a tweeker couple checked in; obviously regulars. Then, a drunk man, named George, used the lobby phone to order a pizza for delivery. George was about 68 and 70 sheets to the wind and I'm not sure when was the last time he partook in a shower; perhaps it was the lack of hot water.

The manager, who had been loudly listening to Glenn Beck and complaining about Obama and gays, came out to assist me with what had now become a full blown bullshit issue. Expedia was trying to figure out their credit card issue with the hotel and I had been in the lobby for 45 minutes. So much time that George had ordered his pizza, missed the door knock, the delivery guy had come into the lobby, Tyler called George and told him to open the door and the delivery guy went back up to Georges room. Another vagrant looking couple had also checked and Tyler informed me that homeless often sleep at his hotel. By now, Tyler and I had become friends. 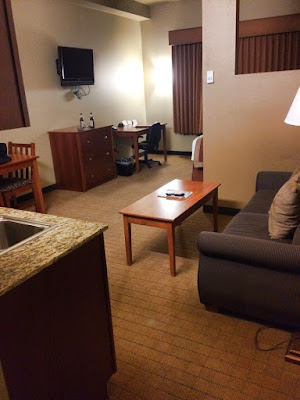 So after an hour and a half of bullshit, I called Expedia myself - while the hotel was still on hold. Tyler wished me good luck when I told him that I was going to ask them to cancel my reservation at their hotel and book me a new reservation in town that Expedia was going to pay for; he didn't think it was going to happen. I was confident that sound resent and politeness would make it happen. Ten minutes later, Tyler was shocked I had gotten what I asked for and I told him that travel tip was free (with a grin; pleased with my outcome), just as George came in and offered us the rest of his pizza. I declined after considering it (normally it's against my rules to turn down free food), bid adieu to Tyler and was soon on my way to my new hotel for the night. And this is how I ended up in a three star (fancy! for me) hotel for the night for free.

The juxtaposition not lost on me: Last night I was sleeping on a bare twin mattress on the floor of my server's house, rolled up in a blanket like a burrito  and tonight I'm staying in a super nice three star hotel - complete with box spring and sheets! This highlights just how totally weird my life is right now. And I love it.