So, I tried again. The following day, I had a day date set up with a guy named Thom. It was his idea to go day drinking, but when I texted him around 11:30 (hoping to postpone till evening), then 12, then 12:30 to confirm our 1pm date, I got no response, which sucks because it's a 35 minute drive into the city. I was nearly in the city and it was quarter to one when he finally texted me back: He had forgotten about our date.  (Well, there's an ego boost.)

Honestly, I was blasé about it and said I was happy to spent time in the city until he was ready. I wasn't planning on finding love through Tinder, so as long as we still met up and I didn't waste my time driving out and putting together and outfit, I was fine with it. We settled at 5pm. And I set off exploring the city, accidentally finding myself in Queen Anne with the best view of the city (above, when I made a right instead of straight because I wasn't about to stop at that red light on the 90 degree incline) and making my way to Pike Market (but that was mostly because I had to pee; I'd been last year and I'm not a huge fan of uber tourist things). I had a couple of people compliment my magic coat and then it was time to head over for my date. 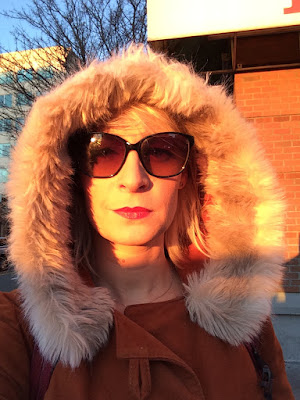 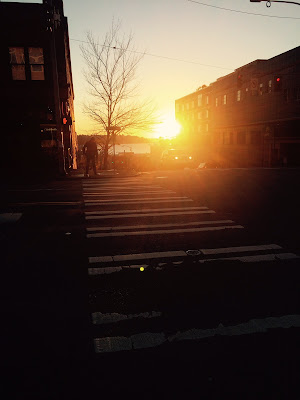 I arrived in the Fremont section of town on time. I was then fifteen minutes late on purpose - tit for tat, Thom. When I walked in the door, I decided to make a sort of dramatic entrance for no other reason than that I felt like it in my magic coat. So I entered with my hood on, waited until he looked up (he had long hair and a beard and reminded me of Dave Grohl, plus he was the only single dude in the place, so he was easy to spot), then removed my hood by lightly grabbing the fur that framed my face and slowly pulling them down. I don't know, maybe it was my Jean Harlow moment...

Evidently, it worked. As we immersed ourselves in happy hour margaritas and got to know each other, he loosened up enough to admit: "You are gorgeous. You are the first person who is more attractive in person than in their profile photos." If that weren't flattering enough - and perhaps because he seemed to only flatter my aesthetics - I asked for words that would describe me: "bold, beautiful, intelligent and interesting." Nice. Ego boop! Um, you are now (mostly) forgiven for being four hours late.

After a couple of cocktails and a nice big meal, we decided that playing Bananagrams was the next right move. So we stopped at a store and grabbed the game and cider and more Not Your Father's Root Beer (if I drink it while it's free, maybe I won't want it when all I have is me again, I thought). Unfortunately, when I went to place the cider on the belt, the bottom fell out. So then I'm standing there with an empty six pack around a pool of cider and broken glass with the cashier looking at me like I don't know how to adult and I'm just blinking back, stumbling for words. This is so typical.

Making me slightly less stupid, was the fact that Thom left his card at the bar and asked me to pay. He assured me he would pay me back later. We went back to his place and drank and played Bananagrams. I had too many drinks to drive 40 minutes back to Carnation legally - like I drank so much 'Root Beer,' I had to switch to water because the sugar made my stomach cramp - so I stayed there. (Initial new rule: Limit to two alcoholic root beers per sitting.) In the morning, a knock came at the door. Being that it was Thanksgiving, this seemed odd. The knock came twice more, with increasing ferocity before he finally answered the door. Awkwardly enough, it was his ex-wife. I hid - which is somewhat of a challenge in an apartment the size and shape of a hallway. This is so typical.

Soon after, I gathered my things. We talked about getting back together that evening to watch "The Big Lebowski" after I had my Thanksgiving meal - and he avoided his with his ex-wife and their child. Heading out the door, I put my hand in my coat pocket, while observing how incredibly ridiculous I looked (and having a laugh over it) and found a 100 bill. Thom had indeed paid me back with "the smallest bill [he] had." (Sorry. No change!) Now, had I not felt walk a shame enough, the $100 bill made me feel particularly awkward and then when I walked outside, there was an male octogenarian messing about in his car who took time away from his task to blatantly stare at me. I was waiting for him to come over and ask "how much." This is so typical.


I got back to the house and hopped in the shower. I then made my mom's broccoli salad for my contribution to the casual pot luck Thanksgiving. I spent time with my host family and their group of "orphan" friends they invite over for the delicious holiday. It was a nice time. The food was good. And I was so damn happy to not spend Thanksgiving alone - a concern I had out of the gate.

In the evening, I headed back over to Thom's for a cuddle (zomg! extended human contact!) and a movie. As a bonus, I didn't dispense change as instructed and was, thus, $60 richer - and with Bananagrams I'd already announced I was keeping. I was a happy little human being! 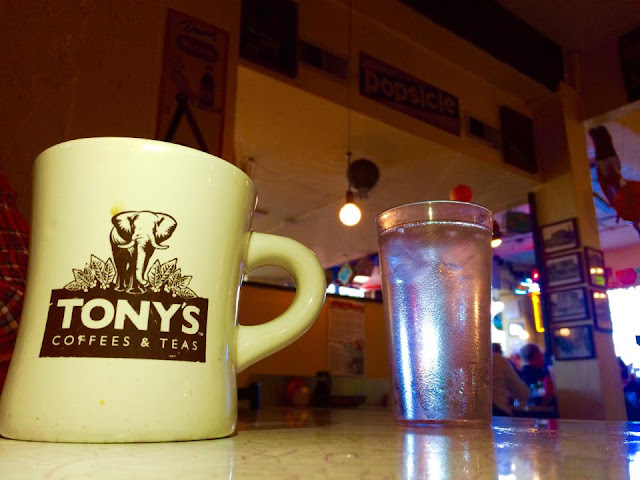 Posted by Hatching West at 8:59 PM