I woke up at 8am. I'll be damned if I wasn't going to get that free breakfast. I had already spent $45 dollars more than I wanted to, plus the $8 food truck burger (which I still don't regret, but the fries were unnecessary), so I told myself I was going to be damned sure I got up for breakfast. Anyone who knows me well, knows I'm not a morning person at all. So that's how much I meant this. (ha.)

When I walked into the "lobby," which was no more than a hallway sized room leading to the receptionist window with a counter on either side with a waffle maker, some doughnuts to my left and a coffee canister to my right (with a sign that read: "for guests only; not for weekly residents"). I helped myself to a chocolate covered doughnut, poured some batter in the waffle iron, and hovered near it, trying to talk myself out of eating another chocolate covered fried dough. As I enjoyed my doughnut, an overweight, middle aged woman ambled, looked around and then called to the back for more waffle batter to be brought up. (I had used the last cup of it.)

Once the girl on duty brought more cups of batter out of the fridge (and I complimented the doughnuts, which apparently were nothing special, BUT THEY WERE), the woman asked if I was making a waffle. I told her that it was almost finished and she began to rave about how delicious they were, (because she "stays here all the time and just love(s) them"). From here, we began to chat. I learned that her name was Julie and she was on her way to take care of her aunt in Oregon, who has Alzheimer's... and has for the past nine years. NINE YEARS. From this, I surmised that Julie was a saint... and also probably needed someone with whom to talk.

I was going to take my waffle to my room - the entryway had no tables to eat and and breakfast trays intended to transport your breakfast - but Julie began chatting. First, she lamented about the trials of caring for someone with Alzheimer's, then about her home town where she lives when she not taking care of her aunt. I stood for a while, then I moved to the other side of the fridge, then moved again when I was asked to move because it dinged in the back from a sensor every time I crossed it.

Julie invited me to sit. She told me about her life, her abusive mother; her blossoming career in New York City as a promising Opera singer which was cut far too short because, at 21, her father became ill. She spent the next two years caring for him in Montana. A week after he died, her brother was diagnosed with cancer; her own mortality - being only two years his junior - shining in her face. Her mother fell year while Julie was in her 30s. Again, she took time away from herself in order to care for a loved one (despite the abuse). Over and over, Julie, in what appeared to be a leavening moment of catharsis, repeated, "I don't know why I'm telling you this. I never tell anyone this..."

For nearly three hours I listened, interested and intent, sprinkled with bits of my own story and current hard brush with a newly ill family member. But it was clear Julie didn't have many people to talk to - even warning me not to move to her town (Missoula) because there people there were backwards and backstabbing - so I mostly enticed her speak. I wanted to; I was interested and Julie had a lot she wanted to say. Towards the end of our hours together, with check-out time looming near, she asked me about myself; she was on her way to take care of her aunt and this hotel is her normal halfway point between Missoula and Oregon, but what was I doing in Ceour D'Alene? I told her that I was traveling the states; looking for my new home. "And you're doing it all alone?" she primed, quizzically.

"Oh, that's amazing!! Good for you. I would have been too scared. But I wish I'd done something like that. Before my life was ever really started, I was back home taking care of my father and then I just became the family caretaker." It was very clear that Julie had a lot to talk about; perhaps a lot of regret. "What are you looking to find?"

"Well, I'd like to escape the snow," she nodded in understanding. "I'd also like a partner because I'd like to have kids and I'm not getting any younger and my odds are much better on the west coast than the east coast: Like two to one."

"How old are you," she asked, perplexed why I would rush into something so young and I when answered 32, she seemed surprised. "Oh. Wow. You look so young! [I grinned. Yay!] I'm so surprised that you're still single, you're just beautiful!" she exclaimed for like the 10th time.
"Thank you," I replied, bashfully, "But I'm not even wearing make-up," finally both uncomfortable and comfortable enough to admit that I felt far from beautiful without my 'face' on.

"Oh! You don't need make-up!" she informed me, dipping her voice down now to offer her sage advice, "And here the men don't like a lot of make-up. The Idaho men don't like to see a lot of make up so you'd be better off finding someone without wearing much make up. Just put some on so it looks like you're not wearing any."

"Well, good for you," she said. "Good for you for admitting what you want and going for it. Don't lose that; you need to live for you first - I figured that out too late. By the time I realized what I wanted, I was in my forties and it was too late for me. I will pray for you. I will pray that you find what you are looking for."

"Thank you." I felt the warmth of her prayer. I felt touched as though she really wanted for me to achieve the things I wanted. We parted a few minutes later, realizing that we had been talking for three hours and it was now nearly 11am; thankfully I had asked for a late check out. Julie and I traded information and I hoped that we would keep in touch, but realize it's probably unlikely (she doesn't care for email and has a flip phone) We hugged and I felt an affection towards her; I felt connected. I left feeling as thought I served a cathartic purpose for someone that day; that Julie felt better having gotten a lot of things that she "never tells anybody" off of her chest and was lighter, perhaps even happier because of it. It's these really random encounters with strangers that have become the most interesting part of my trip, and Julie, by far was the most intimate of encounters. I feel like we're strangers turned acknowledged and linked sonderers.

I left for the day and headed west towards Spokane.

Unfortunately, arriving in Spokane didn't alleviate the issue of downed traffic lights. Apparently the windstorm was states-wide, as I had also woken up to a text from my friend in Seattle, who informed me that it was a good thing I pushed my date back because they didn't have power. Well, neither did Spokane. Apparently Julie and I had managed to find one of the only places in the tri-state to have no lost power.

I arrived in Spokane and found a Verizon store; I was mid-panic since I'd left Coeur D'Alene and hour earlier because my JetPack had died in the night. Surprisingly, Verizon was also one of the only blocks that still had power. I was panicking but luckily it simply needed reset, the winds in the night had caused a power surge and had disabled my JetPack. Soon after, I was again on my way... but to where. I navigated the downed lights (and props to Spokaneise, who used the four way stop method quite effectively. It would have be total disaster in DC) and headed to downtown. Parking was an issue, so I kept going until I headed into an unsavory part of town and realized there was no power their either. 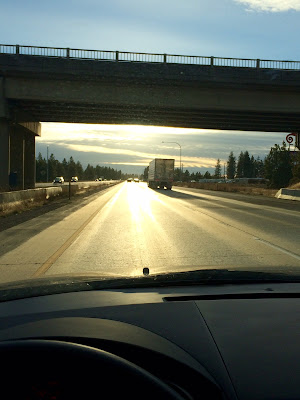 I headed back into downtown. I looked into the price of hotels, which were well out of my price range of zero dollars. I wanted to stop and have a look but parking cost money and I didn't see much of anything to do - besides eat, which also cost money - or walk around their downtown park, but then the parking cost money. I was there for about four hours, I got a well enough feel of the area to realize I didn't need a larger feel of the area, inched my way back out of power-less lights and back onto Interstate 90. By now that sun was setting and I was heading directly west - so told by the blinding sun.

I ended up in Moses Lake, Washington. I didn't make it very far today, but that wasn't really the point: Ron, from South Dakota had told me to check out Spokane, so that was more of the point of today than getting far. So once night fell, I spent an embarrassing amount of time driving around Moses Lake, attempting to figure out my night's 'home.' I checked out a truck stop, which wasn't going to work, then a Motel 6, which I decided was dumb (since I will have full access to a shower tomorrow at my friend's house) and too expensive at $50, then I settled on a Denny's, which after choosing a parking spot, also decided against. I was back out and happened to pass a Dairy Queen when I was scoping out a residential area to see if perhaps I could sleep there unnoticed. While I had a brownie blizzard for dinner (sorry, mom), I decided to see if there were any Wal-Mart's in the area. It's probably about time that I enact my plan of sleeping in Wal-Mart parking lot's anyway, I figure. 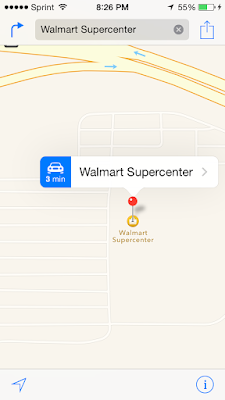 Lucky me, there was. So, here I am for the night, sleeping in the Wal-Mart parking lot. It seems I'm not the only one though - I've got about four other friends parked about five spaces apart each, on the periphery of the Wal-Mart near the auto center. And here, tonight, is home.

Posted by Hatching West at 8:28 PM