I had been to Seattle before. February 2014, to be exact. I was there to check it out, as it was my last location I was going to move to (aside from a brief idea bout Phoenix in, which died disastrously and lead me to idea to vagabond in search of a city) until my girlfriend I was going to stay with until I got settled had a life altering event and moved home to Boston. I was so ready to go, in fact, that the car I have now was purchased August 1, 2014 in anticipation of the move I was to make six weeks later. Life had other plans, I guess.

When my girlfriend left Seattle and I considered Phoenix, brimming with delight by the fact I was eating ice cream outside in the sun in February, she said, "Well, maybe Seattle really isn't sunny enough for you." I believed her, but just to be sure I didn't want to live in Seattle, I decided to revisit it.

That being said, when I arrived, I didn't have any particular plans in mind. Go with the flow, mainly. I wanted to check out Tinderings to see what dating life was like in the area and how locals felt about the city. And I was also thrilled to not have to spend my favorite holiday alone.

Friday, 11/20, I did nothing. It was amazing. Saturday, Dave wanted to take me hiking near his house and to see a local waterfall. First, the waterfall wasn't even sort of visible thanks to fog - though we did stop for a cup of coffee at a local cafe before a day of fail, which was delicious. And then we tried to go to the hiking trails, but they were blocked by downed trees from the storm that rushed across Washington and Idaho (the same one that trapped me in Couer D'Alene.), so the trails were close.

The following day, we had big plans to go to Olympic National Park. I had a thought that perhaps we should check what Mother Nature had done for that route before he went on the two hour journey out there. And, unfortunately, Mother Nature had blocked off the roads we needed to get there, so that was out too.  The weekend nights found us at bars downtown, mostly pinball bars, as Dave is a huge pinball player. (They have leagues even and apparently Seattle is the pinball capital. Who knew?) 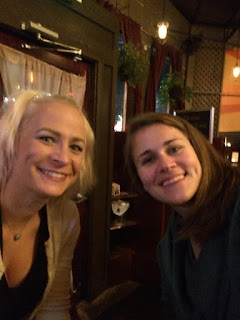 Since we weren't going to the park on Sunday, I took the opportunity to go have dinner with a good friend of mine from DC days. We met when she was sleeping on the dining room floor of a mutual friend of ours for the summer while she had a internship before moving out to Seattle to get her PhD. One of those people you immediately click with and no matter the time that's past, you pick right back up where you left off. She's always a good time and it was wonderful to see another familiar face. Quite refreshing after so much time alone and away.


Monday rolled around and I have finally finalized my plans to go home for Christmas. My mother had been bugging me about it since Moab. Since my father got sick, she had to cancel her plans to meet me for a long weekend in San Francisco. In exchange, she was trading in her tickets to fly me home for the holidays. Unfortunately, flights were about $750 one way out of all of the California airports. So I struck up a compromise to drive 1,200 miles out of my way to Las Vegas for a $200 flight, and then the saved money could be used to fly me down to Clearwater to see a middle school long friend of mine, whom I have called Butthead forever. Butthead called a few weeks ago for a chat and mentioned that maybe I could make it down to Florida since I didn't drive that way and she had just moved there last year. Florida sounded wonderful after having driven into an early winter. So, my mother booked my flights on her cancelled trip for 12/24, 12/31 and 1/7 for LAS to PIT, PIT to TPA and TPA (SAT) to LAS, respectively. And now, I have a schedule to meet again.
Posted by Hatching West at 7:00 PM