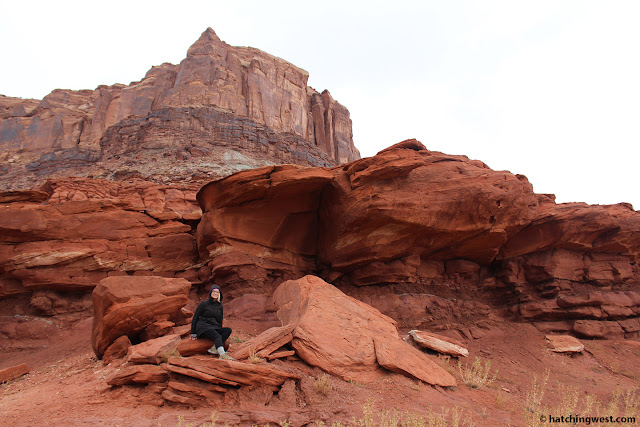 I pay attention to license plates a lot - always have, maybe it was all those road trips down to North Carolina for family vacations as a kid: We played the license plate game. Find a new one no one else had yet, get a point. So it's not that have never seen a Utah license plate before, but on the day I arrived in Utah a week ago, I finally paid attention to the plate art. I think it was a combonation of driving through the boring salt flats, being alone, and having a (apparently insatiable) natural curiosity. So I Googled: What is on Utah license plates? This was the first I had heard of Arches National Park.

Then, mentioning it to Danny, he and his roommates all clamored: YOU HAVE TO GO TO MOAB! So, that's what I did. But before I left Salt Lake yesterday, I had a Facetime with my father in the hospital. He is looking well, all things considered. Waiting for the call, I didn't leave Salt Lake until about 2pm. I was heading south through Provo, to take the more scenic route and debating with myself for about an hour of the drive, decided after Provo, to go back north and take a more direct, diagonal route that my step dad had mentioned. However, by then it was getting dark and I was heading through mountain passes - dark and windy and scary, reminiscent of that terrible night drive through Wyoming. So I stopped in Price and got a hotel, figuring my lodging was evened out by two days of free lodging (and no gas) in Salt Lake. 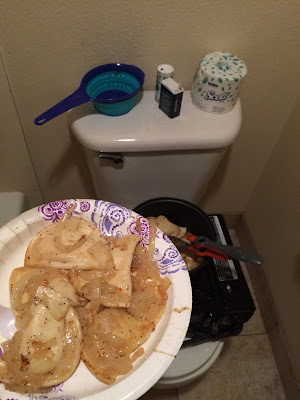 (As a bonus, I made pierogies in the bathroom - and they were deeelicous like home. I've learned to do a lot with a mess kit and one burner. Why bathrooms? Bathrooms don't have much to catch on fire, plus they have ventilation. The last thing I need is to set off the smoke alarms and come out of my room, braless, with a batch of pierogies in my hand going "it wasn't me.")

For those catching up, my budget is as followings: $100 for gas, $125 for campsites/lodging, $50 for food per week. So far I have been doing fairly well managing this budget. And typically fall under for food. Unfortunately, a lot of campsites have closed up for the season - which was part of me kicking myself the past two weeks for choosing to leave on the off season - but on the plus, I have been able to find hotels for cheaper due to the off season, sometimes even cheaper than some campsites, e.g. $25 a night in South Lake Tahoe. I haven't really figured out how to manage the campsite closures henceforth, but as is everything since I left, I suppose I'll just have to figure this out as I go along. I only have about six weeks left anyway.

But I digress. In Price, I headed to Wal-Mart to stock up on food before going to Moab, because most of these National Park areas don't have grocery stores and if they do, they're way overpriced. I woke up in the morning and made my way to Moab. Along the way, all I could think about was what my father told me yesterday when we spoke:

When I was doing my hitching-hiking around the United States, I distinctly remember Route 6 - just a two lane highway with NOTHING around. I never made it to Moab though. I got off at Green River because the people I was grabbing a ride from had really started to get on my nerves at that point, so I saw a sign and told them to let me out. When I got out, I realized if I had made a mistake; there was nothing around me. But about 10 minutes later a van came by and picked me up and took me to Salt Lake City.

While I was making my way down Route 6 to Moab today, I couldn't help but feel a connection to him; it felt nice. Just passed Green River - where he jumped out of one car and into another over three decades ago - I got out to take photos of a beautiful mountain range, red rock, golden field landscape before continuing. 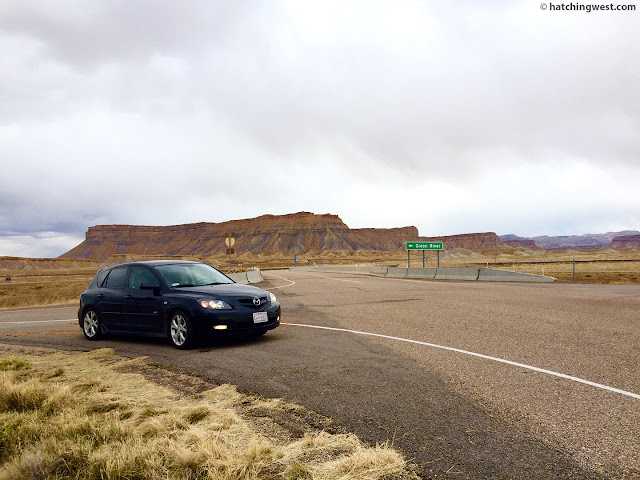 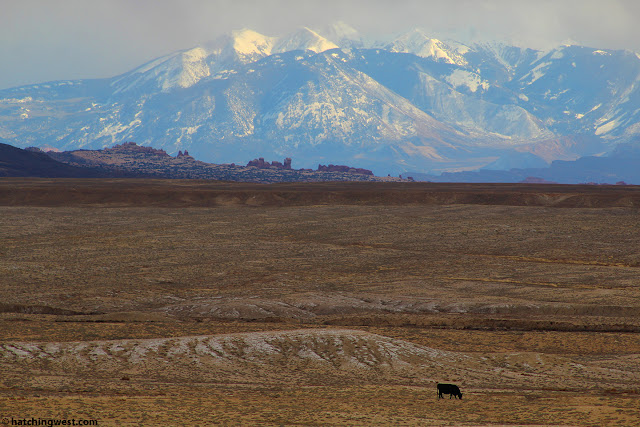 I got to Moab around lunchtime. The weather was imperfect, but that didn't stop me from being taken away by the beautify of the area - despite the gray skies. It seemed that the mountains that took my breath away an hour prior inched closer and closer to me as a drove, until I was surrounded by red rocks with a majestic backdrop of snow covered mountains. 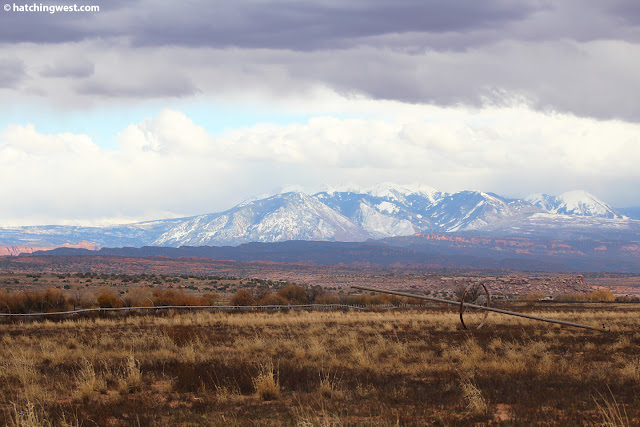 I had enough time for these photos - after layering against the cold and digging out my hiking boots - and the one at the top before it began to pour rain, matching the wind that had picked up significantly since the hour of my arrival. My plans of camping were officially thwarted, my car hammered by the wind and rain; a tent would never last the night.

I made a quick trip over to Arches for a toilet and some information (my commemorative lepel pin and also watched a film on the park rock formations) before settling in to the cheapest hotel in town for the night. I took a photo at the entrance and posted to Facebook: I made it. Looks like I'll have to return tomorrow...

Posted by Hatching West at 2:45 PM