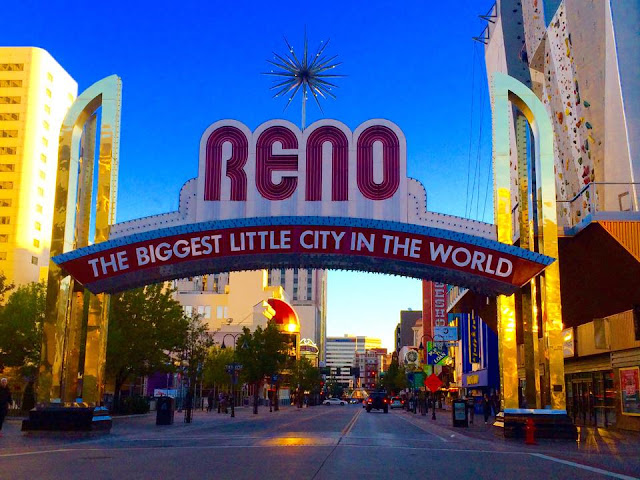 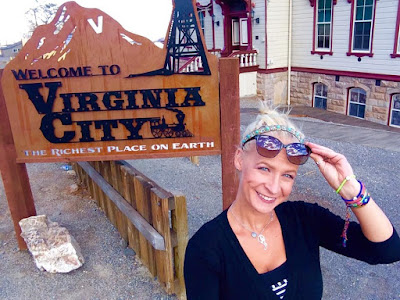 After Tahoe, I asked where to go, per my usual 'plan' of doing what people suggest. I got a suggestion of Virginia City (a little tourist spot that used to be a mining town, just outside of Reno). I had been, but hell, why not - I still wasn't sure of my next move after two days in Tahoe - so I went again. I asked where else in the area with little response, so I decided Reno may be a good go between because a man who owned a sports shop in Virginia City (also from the DC area) told me to drive Highway 50 across Nevada; also known as "America's Loniest HIghway." The lack of gas stations and ... well, anything, he warned ... made me decide to wait till the following morning to go, having stayed in Virgina City until 5, arriving in Reno at dusk.

On my way there, I got a message in regards to the earlier post about where I was: It was an old neighbor an classmate and he said his brother (whom I also know two decades ago) lived in Reno and to give him a ping. So, doing as suggested, I sent the brother (we'll call him G) a message (honestly not expecting to hear back). A few hours later, I was hunting for the best parking spot in the Golden Nugget Casino parking garage to set up my car to sleep in for the night (having decided $50 was too much for a room and a parking garage was pretty clutch), my decades old neighbor messaged me back.  I told him where I was and he said he and his "buddy" (when did guys stop using the word 'friend'?) who was staying with him (considering a move to Reno or something) were going to go watch a football game somewhere else, but they'd meet me at the Nugget instead.

Despite that we grew up together for a few years as neighbors and his mom watched my sisters and I over the summer and before/after school, I was surprised when he said he'd meet me out. Since I had just decided sleeping in the car was the best choice, while I waited for G and his friend to arrive, I found a better spot in the garage - after discovering a camera over the original spot. I also shuffled around everything in my hatch in order to make my car into a bed after a night of some light drinking and, as was my hope, some heavy dancing. (Dancing fixes any interpersonal National Park disasters, right?) 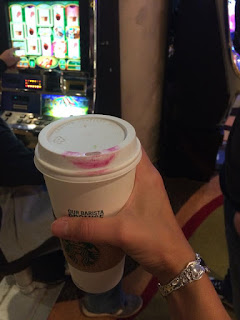 They arrived and texted me their location. I moved my car cocktail into an old Starbucks cup I had from using the WiFi in South Lake Tahoe (thanks for the SB gift card mom!) to walk through the hallways before I got to the bar. Although when I got to the bar, they didn't question the coffee cup as I had anticipated. I realized there was a Starbucks in the casino and that I had accidentally stumbled upon the best hack in casino history: fill your [casino coffee house brand] coffee cup with liquor and bam, drink for free without the gambling.  (G said the lipstick really made it beleivable.)

Once inside, I found him, hugged, and after about an hour - and traveling back to my car for everyone to enjoy a car cocktail - G offered me to stay on his couch for the night. I was apprehensive, but he said "I mean it's a hot shower" and sold! Okay. So I rearranged my car from out of bed mode and dropped it off and we went back out and had a really good time, even talking about going out for Halloween the following evening.

The following day we went out for coffee and came upon a Halloween store after talking about going out together for Halloween the night before. I found the most magical witch hat for $15 and insisted our chat about going out for Halloween become reality. We ended up getting costumes for that night and Saturday (Halloween): A witch, a banana, and a hot dog. Friday night was a blast; a blur.

Saturday was a miserable day of hangover, waking up in last night's clothes on the inflatable mattress sunk into the deflated hole with G/Banana's friend, the Hot Dog, and realizing I danced so hard the night before that I danced the sole right off my shoe. I then threw up at 8pm (thanks 32 year old liver): No way was I making it to SLC that day, in my stupidly miserable condition. (Although the friend was a comfortable spoon.)

This means Sunday. Although by then the weather in SLC the next few days was looking tragic, which included not great driving conditions, and next decent drive wasn't for a couple of days. Plus, as a bonus, I had now taken up residency on the air mattress over the couch, which meant I sunk into the deflated hole with the Hot Dog, and consequently, a man, and oh have I missed human contact.

However, I felt at this point that I was wearing out my welcome. To much up for it, I made dinner (twice, with food i went out and specifically bought for it), I cleaned daily, only ate my food; stayed out of the way; bought a 12 pack of hospitality beer to say thanks for letter me stay and at each favor, said "thank you" to G. I was ready to leave by Monday but first needed to nab and oil change. However, Monday was snowy (snowy! in the desert!) and cold and I had to walk a mile to get my oil changed and venture in and out to do my laundry before I left. For a girl trying to actively avoid winter and snow, none of this was appealing. Plus, in admittedly, I was enjoying the company of his friend.

So in the morning before G left for work and said, "You're welcome to say as long as you want but my neighbor needs their spot back," I thought: Alright, he says I'm welcome, I'll wait a day to change my oil so I don't have t venture around in the desert snow and be sure to bypass any snow covered roads among 'America's Loneliest Highway' mountain passes.

Which brings us to tonight, Tuesday: When he was going to bed, he stopped, came back in the living room, stood in front of my laying (with my head on the lap of the friend) and said, "Yo, it's been real..."

"Yea. I know. I'm leaving tomorrow," I said in a quick response, while half asleep, realizing where it was going and that my gut, per usual, was correct and this conversation was uncomfortable.

"Ya. that's what I thought," he said and for whatever reason, continued, "but I think a week is pushing it and, honestly, it's getting kinda weird."

Alright. That seemed like a fairly unnecessary additive, but I get it. He wanted me out. And it was then that I realized when my gut tells me one thing and the person directly involved tells me something else (e.g. "you're welcome to say"), that I will go with whichever one benefits me more. Perhaps this isn't the best approach and from this I have learned: the gut should always win or prepare for an awkward exchange.

But hey, if you tell a homeless person they're welcome to squat, chances are, ya'll, they're gonna squat. Either way, I feel a little stupid, but what can ya do? Pack up and move on (but hey, I saved some money. Life in your car, it's going to have it's awkward moments: from getting caught peeing in a national park, to being stuck in your car surrounded by buffalo, to taking a ridiculous amount of coffee creamer and relish with a small gas station coffee  (don't you put relish in your coffee?), to having pie with two strangers in an Indian trading post after getting kicked out of the park, to pretending to be a rock, to getting asked to leave your old neighbor's house - who you haven't seen in two decades - because they offered you a couch versus sleeping in your car and then it snowed in the desert. Suddenly, I realize this sort of life is a weirder than I thought and lends itself to really, really awkward moments.