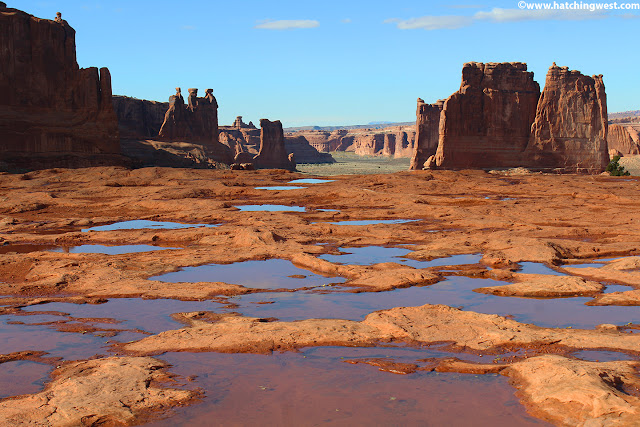 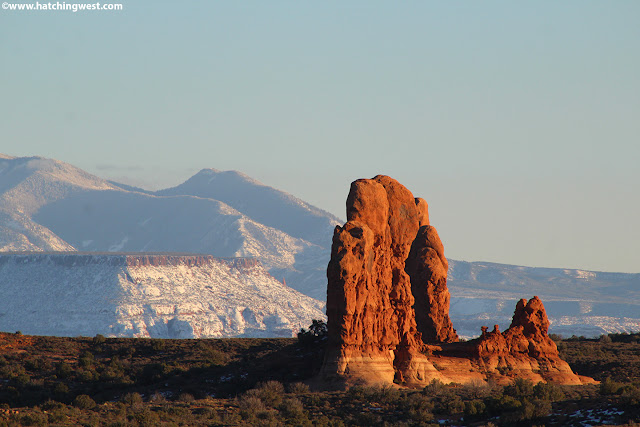 When I woke up, the weather was perfect: 50s and sunny. Considering the educational video at the park yesterday advised everyone to "STAY HYDRATED," as we were in a desert, and I had also overheard a Ranger tell someone that lines to enter the park were miles long in the summer, I considered myself incredibly lucky. Point to: Off Season.

I didn't even get a mile into the park before I had to stop for a photo.  To my right was the highway leading to "downtown" Moab and driveway into the park. To my left, a beautiful rising, red rock. 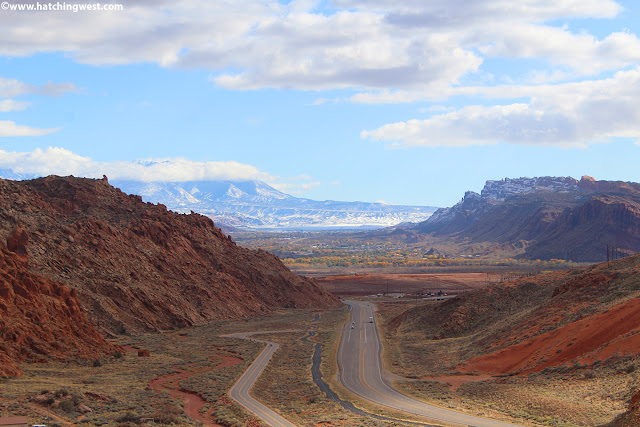 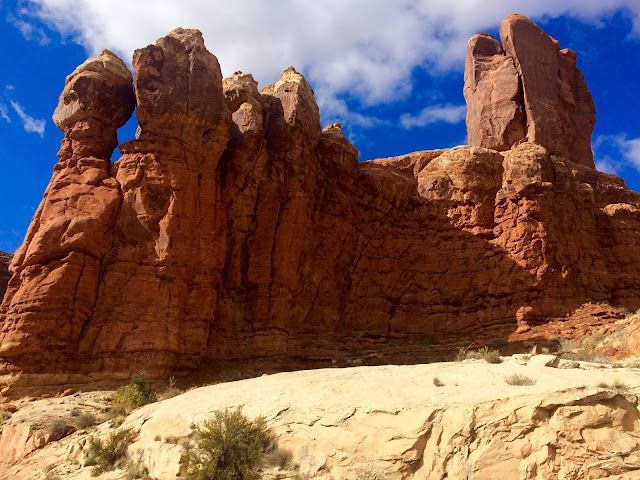 I made it another mile or two before I had to stop again. 1. My beautiful mountains, whom I have been falling in love with for miles, were now on full display, backdropping the awesome topography of Arches National Park. I popped out of my moonroof for a selfie and realized, in that moment: I have  no idea how I managed to make this my life, but I'm so glad I did. 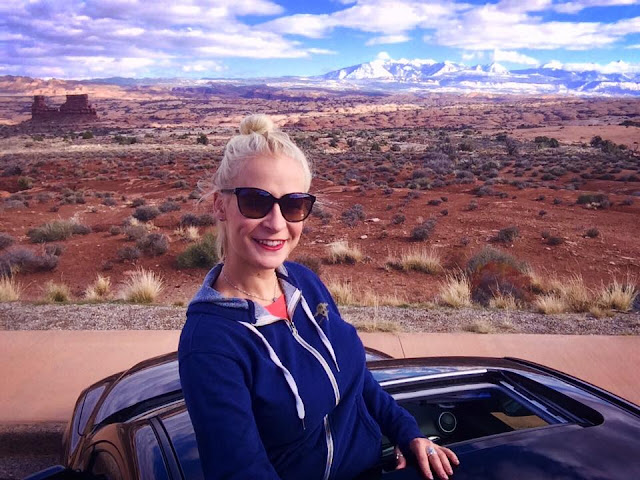 And 2. I had had coffee for breakfast and now really had to pee (a theme of mine at National Parks, it seems - it's nature, right? So it's fine.) After ducking behind a huge rock, walking a bit into the desert field, I was safely out of view of the people stopped at the vista. I realized mid-squat that this was a really got spot for photos. So I went back up for my tripod and DSLR and came back to take a few images before moving on... 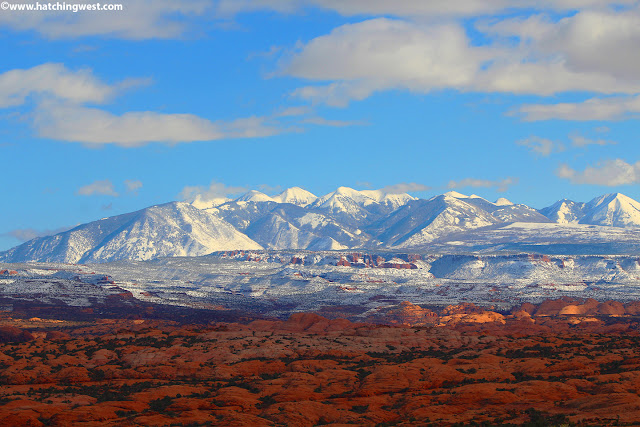 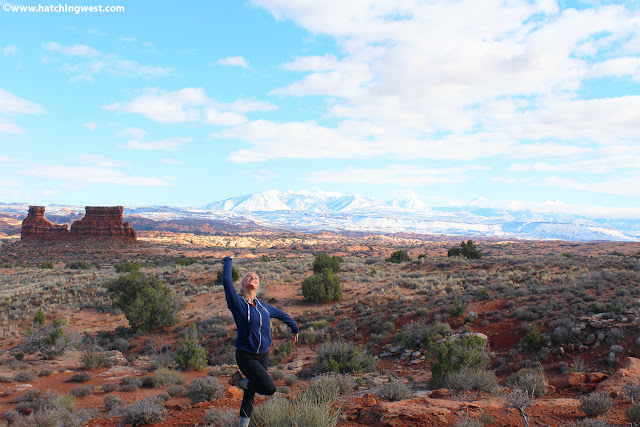 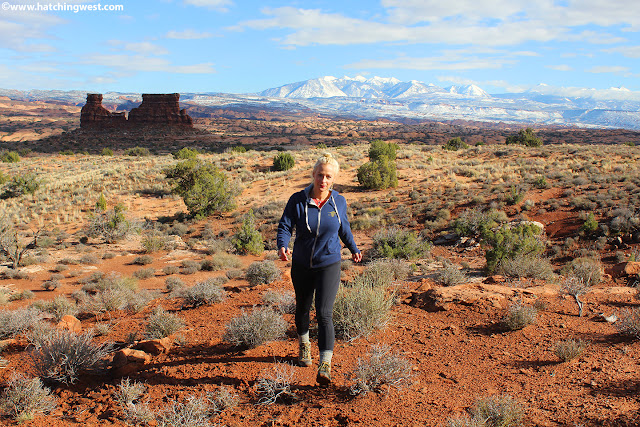 The rest of the day continued with rocks and arches and a dog in sunglasses and I was officially falling in love. I  knew aleady, when people asked from now on where my favorite place was, I had an answer: Moab, Utah. It's certainly not a place I would want to live permanently (too small), but it is absolutely breathtaking and I will be back more than once in this lifetime. 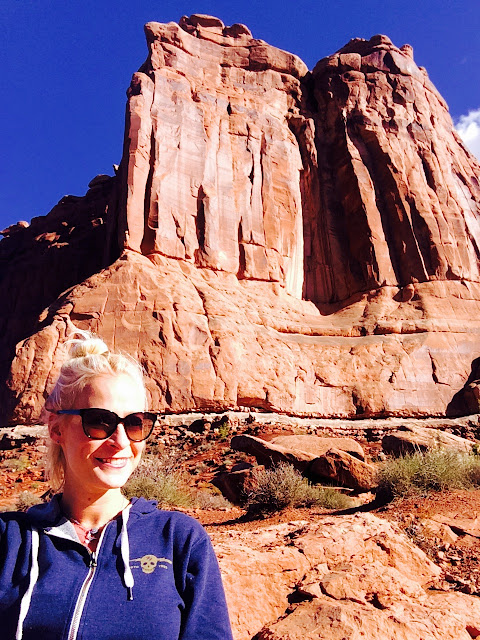 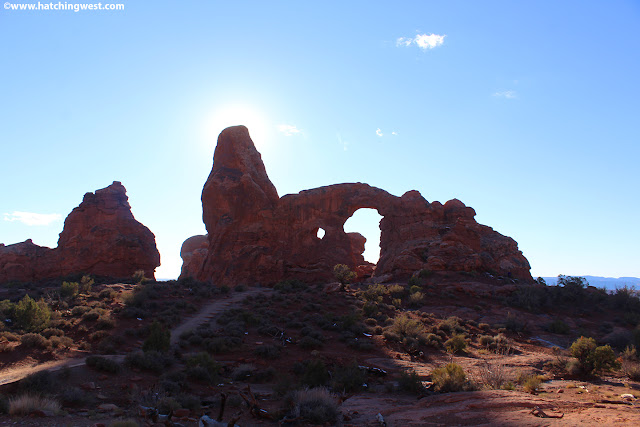 After I hiked for about hour or so around Windows Arches, I made my way to the entrance of Delicate Arch - the arch on the Utah license plate that brought me here in the first place - near dusk. Unfortunately, the drive-in entrance was flooded from yesterday's heavy rains, which means that I will have to traverse a moderately difficult, three mile hike (round trip) in order to see it. I don't mind, but I didn't have time to accomplish that before nightfall today. So I decided to camp on the interior of the park, not far from Delicate (and about 11 miles into the park).

Apparently the campground is totally full in summers. For example, it's probably too late to make reservations for next summer and it was full this previous Saturday, the Ranger had told me yesterday when I had inquired. But today it was pretty open. Another perk of off-season travel? I'll take it. I drove around and had lots of options, settling on the best spot I could find near the toilets with the best morning view of the park and mountains.


I put my money in the trust box, where I nabbed a shot of the last moments of today's sun and then proceeded to set up my tent as the sun finally settled behind the rocks. My newly beloved, rocks. After the sun set, the temperatures plummeted. I had checked the weather and was aware the temperature was going to dip below freezing for the night, but I wasn't prepared for how swiftly that occurred. 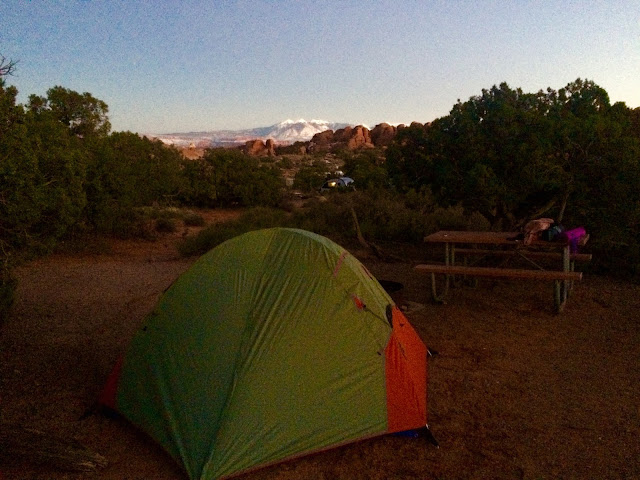 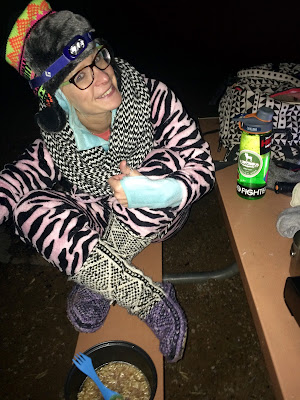 After pitching, I layered up with whatever I could find. This resulted in an incredibly sexy outfit > (hey guys, I'm single. *wink*) I made some Ramen for dinner - which got cold before I could eat it all - and then settled into my tent for the evening because - damn - it's getting really damn cold really damn fast up here. Goodnight, she types with increasingly freezing fingers, I hope I survive this sub-freezing night. :) But I don't care if a finger falls off (okay, I care a little), because I'm falling in love. 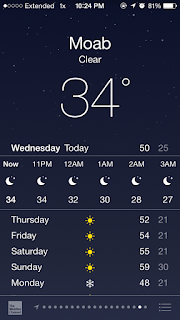 Posted by Hatching West at 7:30 PM